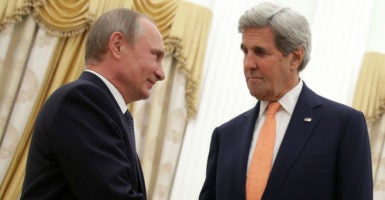 KYIV, Ukraine—If the FBI proves Russia is behind Friday’s leak of embarrassing Democratic National Committee emails, the revelation would be consistent with Russia’s pattern of clandestine and overt gambits to influence the politics of its perceived adversaries.

“In the Putin era, Russia has been aggressive on many fronts, including invasions of Georgia and Ukraine,” said Kenneth Geers, ambassador of NATO’s cybersecurity center and a senior fellow at the Atlantic Council.

“In cyberspace, the concepts of sovereignty and jurisdiction are much less clear,” Geers, who lives in Kyiv, told The Daily Signal. “If Putin can deny that his tanks are in Donetsk, he can certainly deny that his malicious code is in a DNC server.”

The Kremlin has denied any involvement in the hack of the Democratic National Committee. But, according to some experts, this is textbook KGB tradecraft, updated for the digital age.

“Most of the advances in cyber are just old-school stuff executed with new technology,” said Steven Bucci, a visiting fellow at The Heritage Foundation who served for three decades as an Army Special Forces officer.

“The Soviets always tried to influence both friend and foe; the Russians are doing the same,” Bucci said.

Friday’s email leak sparked panic within the Democrat Party on the eve of its national convention in Philadelphia this week.

Democratic National Chairwoman Debbie Wasserman Schultz stepped down after the release of the emails, which appeared to show DNC officials consorting to undermine the presidential campaign of Sen. Bernie Sanders of Vermont.

U.S. Secretary of State John Kerry met with Russian Foreign Minister Sergey Lavrov in Laos on Tuesday to discuss U.S.-Russia military cooperation in Syria. When reporters asked Kerry about the email hack, he said, “I raised the question and we will continue to work to see precisely what those facts are.”

Speaking to reporters in Moscow on Tuesday, Kremlin spokesman Dmitry Peskov rejected accusations that Russia was behind the leaked emails.

“In general, we still see manic attempts to use the Russian topic in [the] U.S. electoral campaign,” Peskov said, according to the Russian news site TASS. “There are no new standards here. Unfortunately, usual fun and games continue.”

No private or government agency has released hard proof directly linking the DNC email leak to Russia or Russia-sponsored groups.

If the FBI determines Russia is behind the DNC hack, some say it would mark an escalation of Kremlin operations to influence U.S. politics.

“Certainly, Russia has become a master at manipulating information for their strategic goals: Witness the information bubble they have created for their threatening behavior in the Crimea, the Ukraine, and elsewhere,” said former CIA and National Security Agency Director Michael Hayden, according to Reuters. “A step like this, however, would be really upping their game.”

Hillary Clinton’s campaign was quick to blame the email leak on Russian hackers, pointing to a DNC-commissioned investigation by the private cybersecurity firm CrowdStrike.

The Democratic National Committee hired CrowdStrike in April to investigate a cyberattack on the party’s email servers. CrowdStrike determined Russian involvement through circumstantial evidence, such as the hacks coinciding with Russia’s time zone and holidays, and certain digital evidence such as computer code written in Russian.

Cyberattacks are a key component of Russia’s “hybrid warfare” playbook, used to devastating effect in Russia’s seizure of Ukraine’s Crimean peninsula and ongoing military support for pro-Russian separatists in eastern Ukraine—operations spearheaded by the FSB and GRU.

During the 2014 Ukrainian presidential elections, a pro-Russian hacking group launched a cyberattack against Ukraine’s election commission.

The cyberattack didn’t affect the outcome of the election, Ukrainian officials said, but it diminished the faith of Ukraine’s electorate in their first election after the 2014 revolution. Since 2014, Russia has maintained its cyberoffensive against Ukraine, launching cyberattacks against Ukraine’s banks, railroads, mining industry, and power grid.

“In Ukraine, there has been significant manipulation of the information space, from the capture of U.S. diplomatic communications via signals intelligence and their publication on YouTube, to fraudulent Facebook and VKontakte accounts created for more tactical information operations,” the NATO center’s Geers said.

Cyber experts say Ukraine is a hotbed of digital espionage. U.S. government personnel are briefed on arrival to the country to assume Russian intelligence agencies have bugged their phones and homes, and to conduct their personal lives according to the expectation that it could all end up on YouTube.

‘Tip of the Iceberg’

Apart from cyberattacks, Russia has also tried to affect the political process in some European countries by financially backing “euroskeptic” political parties, both far right and far left, such as France’s National Front and Greece’s Syriza party.

“The Kremlin clearly has a long-term interest in supporting the anti-EU activities of the European far right and far left,” Marcel Van Herpen, director of The Cicero Foundation, a Dutch think tank, told The Daily Signal in an earlier interview.

Russia has also taken overt steps to shape public opinion in the U.S., including the launch of RT America, a spin-off of the Kremlin propaganda outlet Russia Today.

In 2010, after the U.S. overtook Russia and Saudi Arabia as the world’s top natural gas producer due to the shale oil boom, Russia began financing anti-fracking environmental groups.

Shale oil is extracted through hydraulic fracturing, or fracking.

“If a foreign power, such as Moscow or Beijing, senses that one party or candidate would be significantly better than another for its national interests, it will not hesitate to act,” Geers told The Daily Signal.

“This is just the tip of the iceberg,” the NATO official added. “The world’s three-letter agencies are engaged in more types of covert action and information warfare than the public knows—or would be comfortable with.”