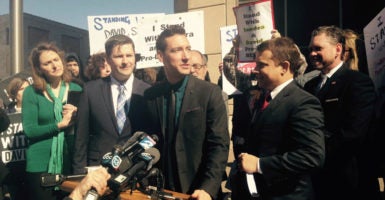 On Tuesday, the Harris County district attorney’s office dismissed all charges against David Daleiden and Sandra Merritt. The duo worked undercover to produce a series of videos alleging Planned Parenthood’s involvement in the sale of unborn baby body parts. Federal law makes it illegal to sell human fetal tissue for a profit.

Daleiden, project lead at the Center for Medical Progress, and Merritt were indicted by the Houston-based grand jury in January for using false government identification during their undercover investigation. Daleiden was also indicted for “intentionally and knowingly” offering to buy human organs. The two faced up to 20 years in prison, LifeSiteNews reported.

Daleiden, 27, called the charges against himself and Merritt, 62, “bogus” and “politically motivated.” He said the dismissal of charges “is a resounding vindication of the First Amendment rights of all citizen journalists, and also a clear warning to any of Planned Parenthood’s political cronies who would attack whistleblowers to protect Planned Parenthood from scrutiny.”

Daleiden shone a spotlight on the darkness that is the abortion industry and faced unrelenting personal attacks as a result. —Roger Severino @Heritage

After a string of the undercover videos were released last summer by the Center for Medical Progress, federal and state investigations, as well as a nationwide effort to defund Planned Parenthood of taxpayer funding, ensued.

Pro-life activists had revealed a potential conflict of interest between the district attorney’s office and Planned Parenthood. Operation Rescue found that a prosecutor in the office also serves on Planned Parenthood Gulf Coast’s board of directors.

In his statement, Daleiden said:

Planned Parenthood tried to collude with public officials to manipulate the legal process to their own benefit, and they failed. A year after the release of the undercover videos, the ongoing nationwide investigation of Planned Parenthood by the House Select Investigative Panel makes clear that Planned Parenthood is the guilty party in the harvesting and trafficking of baby body parts for profit.

“The dismissal of these charges is just more evidence that they should not have been brought in the first place,” said Hans von Spakovsky, senior legal fellow at The Heritage Foundation.

Planned Parenthood has said the Center for Medical Progress videos are part of an “elaborate, illegal conspiracy in order to block women’s access to safe and legal abortion.”

Kristan Hawkins, president of Students for Life of America, calls Daleiden a “hero.”

“Planned Parenthood needs to be held accountable for their horrendous business practices of betraying their clients and selling their babies piece-by-piece for profit,” Hawkins said in a prepared statement.

Planned Parenthood called the Center for Medical Progress’ work and congressional investigations into their organization a “smear campaign.”

“Daleiden shone a spotlight on the darkness that is the abortion industry and faced unrelenting personal attacks as a result,” said Roger Severino, director for the DeVos Center for Religion and Civil Society at The Heritage Foundation. “Now that the misguided prosecution against him has failed, the focus should go back to where it always belonged, on defunding Planned Parenthood and ending the unconscionable practice of buying and selling of aborted baby parts.”

This article was updated to clarify federal law on the sale of fetal tissue.