I Asked Bernie Sanders Supporters If They Identified as Socialists. Here’s What They Said. 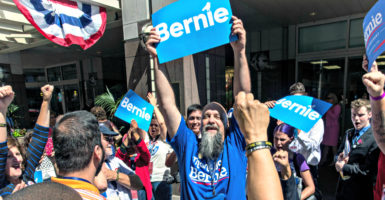 Bernie Sanders delegates from Florida and other states rally outside a hotel on the second day of the Democratic National Convention in Philadelphia. (Photo: Brian Cahn/ Zuma Press/Newscom)

Or at least they do when you ask them if they identify as socialists.

On Monday night and Tuesday, I chatted with around 10 Sanders supporters, both at the Wells Fargo Center, where all the prime-time speeches during the Democratic National Convention are taking place, and at a rally of Sanders supporters adjoining City Hall, where statements on signs included “End Capitalism Before It Ends Us (And the Planet),” “Peace, Love, Bernie,” and “Human Needs Over Corporate Greed.”

Curious to learn more about Bernie’s supporters, I asked them what policy priorities they’d like to see the next president and Congress focus on, whether they thought their movement would have a long-term impact, and whether they identified as socialists.

At the Wells Fargo Center, Laura Simon told me she doesn’t consider herself a socialist, although she believes in “socialist policies.”

“There’s a lot of policies like Social Security, education, [that] have their roots in a socialist philosophy, but to call somebody a socialist because they believe in those things I think is ‘Red-baiting’ and I think is … pointing fingers as if we’re communists,” Simon, who lives in Hartford, Vermont, said. She added:

I think it’s real important not to go there, because some of the best policies in our country and our beliefs come out of the socialist beliefs, that we have to take care of each other.

Like Simon, Zach Pate of Greenville, North Carolina, was unhappy about the view of socialism in the U.S.

“Socialism is tied to communism … the way it’s spun in the media, which is complete nonsense,” Pate said.

Touting the democratic socialism of Scandinavian countries,  Pate noted he didn’t want the government  to “take over the lives of people.”

Pate and Chris Mallin both identified themselves as democratic socialists, as does Sanders. When I asked Mallin, who lives outside Cleveland, what that distinction meant, he said: “It means I have worked within the system for a very long time, and I intend to continue to work within the system.”

“My goal is to see the Democratic Party brought back to the ideals of Franklin Roosevelt and Lyndon Johnson,” Mallin added.

Alice Wendt, who is from Atlanta, dismissed the idea that what she sees as socialism was connected to communism.

“Communism is about taking people’s businesses away,” she said, “and … [socialism] isn’t even closely related.”  Wendt added:

Michaela Bennett said she didn’t know if she is a socialist, noting, “The labels are so difficult that, by saying that, it groups you automatically into something or something not.”

“The idea of the community working together and supporting each other, that idea I do support,” Bennett, who lives in Bend, Oregon, remarked. “So if that’s socialism, I guess so.”

Bennett, who was a history major, noted that in countries such as Russia and China it hadn’t worked “when they’re tried to implement communist or socialist policies.”

Greg Gregg, a Sanders supporter who said he was a democratic socialist, also offered tentative support to capitalism, saying his type of socialism didn’t mean the “traditional” view of socialism as “taking all the private industry and … having the government run it.”

“We believe in capitalism,” he said, but “we need capitalism regulated so it doesn’t overpower the voice of the people.”

One policy that Sanders backers kept bringing up was the the trade agreement known as the Trans-Pacific Partnership (TPP).

“Getting rid of the TPP,” Gregg, of Salem, Oregon, replied when I asked what his policy focus was going forward.

“We don’t want that thing at all because it’s corporate written and corporate friendly and it takes power from the people,” Gregg said. “And it’ll ship our jobs overseas.”

Bennett also expressed concern about the economy, saying: “Everybody I know is poor, and they’re working way too hard and nobody’s got any money and that’s not right.”

“We got to do something,” she said.

When I asked what, she talked about the minimum wage.

We all knew that when it was passed and signed into law. Now … we need to go further and allow everyone to get on a Medicaid-type plan so that no one has to go bankrupt or die because they can’t get health care.

The Bernie backers who spoke to me saw their movement as lasting.

Henderson suggested that the two-party system could be affected by the rise of third parties.

Simon remarked that some of Sanders’ ideas had made it into the Democrat Party platform.