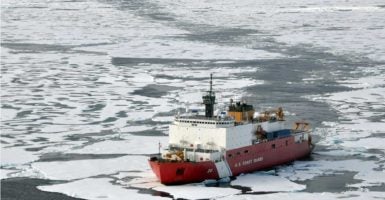 The U.S. Coast Guard must be prepared for an increased role in the Arctic. (Photo: Petty Officer Patrick Kelley/Zuma Press/Newscom)

Adam Lemon is a member of the Young Leaders Program at The Heritage Foundation.

The inhospitable Arctic could become a major area of contention between world powers in the coming decades. As new passages open it, it is up to the U.S. Coast Guard to ensure safe lines of shipping through those perilous waters.

This August, the Crystal Serenity, an 820-foot long luxury cruise liner with 13 decks and 1,000 passengers, will sail from Anchorage, Alaska, to New York City. In an unprecedented feat, the Serenity will get there by taking a route that up until very recently has barely been navigable: the Northwest Passage.

With Arctic sea ice receding, the Serenity’s course is a harbinger of challenges to come, a wave of tourist and merchant traffic traveling through an increasingly accessible Arctic, and Arctic nations have little ability to ensure their safety.

To deal with these rapid changes and future Arctic activity, Arctic nations are stepping up their maritime security efforts in the waters of the High North. The representatives of each Arctic nations’ coast guards gathered in Connecticut in June for one of the first meetings of the Arctic Coast Guard Forum. With its unprecedented levels of coordination, the new forum hopes to chart a shared vision of a secure and cooperative Arctic.

Cooperation in the Arctic will be key for the U.S., as its own capabilities to operate in the harsh environment are currently lacking. The Coast Guard has minimal presence in the Arctic and will be challenged to carry out large-scale search and rescue operations there if an accident occurs. The primary vessels answering such a call—icebreakers—are often days or weeks away depending on the location of the incident, and the Coast Guard has long argued that its icebreaker fleet is far smaller than it requires in the polar regions. Even if there were enough icebreakers, the U.S. does not have a deep-water port in the Arctic where it could base them.

This need for greater coordination led the U.S. and fellow Arctic nations to launch the Arctic Coast Guard Forum in October 2015. The forum expands on the role of the Arctic Council, which does not discuss military affairs in the Arctic but whose members have entered into agreements on incident response.

In the coming years, the forum will be responsible for dealing with several growing Arctic issues such as maritime security, promoting economic freedom and prosperity in the region, and dealing with its largest and most assertive member, Russia.

The forum’s most basic goal is to improve its ability to cohesively employ different nations’ resources to ensure maritime security in the Arctic. This will require a great deal of information sharing and training exercises among Arctic nations to coordinate incident response efforts, as well as commitments from each member to improve its Arctic infrastructure. This will make shipping, natural resource extraction, commercial fishing, and tourism safer and more reliable.

Since the forum is inherently security-focused (though not militarily), it is uniquely positioned to foster dialogue with Russia where other channels of communication have grown tense or have been cut in recent years.

The need for Arctic security dialogue with Russia has become increasingly important in recent years, as Russia has been rapidly militarizing its Arctic territory. Russia established a new Arctic military command, staged massive unannounced exercises with its Northern Fleet, and has been opening Arctic bases not used since the Soviet Union. These concerning actions introduce a hard security component to what could have simply been Arctic safety issues. The forum will hopefully provide a new way to address these concerns.

Predictions of larger-scale maritime activity in the Arctic have not yet materialized, but it is crucial that the U.S. Coast Guard be proactive today so that America will be prepared for what future its northern territory might hold. No nation is fully ready for increased Arctic activity, but with its responsibilities in mind, the Arctic Coast Guard Forum is a step in the right direction.