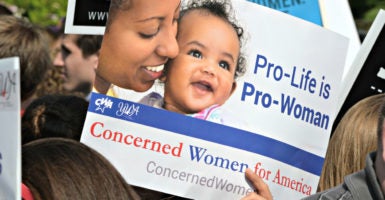 A sign held by a pro-life activist rallying outside the Supreme Court on June 27, 2016. The Journal of the American Medical Association defends its 11-year-old study concluding unborn babies do not feel pain in some abortions. (Photo: Pat Benic/UPI/Newscom)

The American Medical Association is sticking by its influential report asserting that unborn babies cannot feel pain at 20 weeks, despite subsequent studies finding otherwise. Three of the report’s five authors had or later would have ties to the abortion industry.

The Journal of the American Medical Association defended the report and declined a pro-life research group’s request for a retraction. However, the AMA publication’s top editor recently said the study wasn’t presented as the definitive, final word on the issue of fetal pain.

But despite its being 11 years old, mainstream media outlets such as The New York Times and Los Angeles Times cited the study as authoritative in the recent debate over banning abortions after 20 weeks of pregnancy.

The American Congress of Obstetricians and Gynecologists also has cited the study during the debate over banning late-term abortions.

The authors of the American Medical Association’s 2005 analysis argued that a developing human cannot feel pain until the cerebral cortex is fully formed. The cerebral cortex is the brain’s outermost layer, which produces the ability to think and reason. The AMA report says:

Pain perception requires conscious recognition or awareness of a noxious stimulus. Neither withdrawal reflexes nor hormonal stress responses to invasive procedures prove the existence of fetal pain, because they can be elicited by nonpainful stimuli and occur without conscious cortical processing. … Evidence regarding the capacity for fetal pain is limited but indicates that fetal perception of pain is unlikely before the third trimester.

At least two other studies, one in 2006 by the journal Pain: Clinical Updates, and one in 2012 by researchers at the department of anesthesiology at the University Hospitals Gasthuisberg in Belgium, concluded the opposite, determining the development of a cortex is not necessary for an unborn baby  to feel pain.

Nevertheless, in a June 14 letter, Howard Bauchner, editor in chief of the Journal of the American Medical Association, told Agresti that after a review the publication’s editors decided not to retract the 2005 article on the study.

The authors, Bauchner argued, “have included modifiers that reflect their review of the evidence available at the time, including uncertainty.” He added: “Although subsequently published reports may add to existing evidence on a topic, or propose alternative theories, that new information does not require retraction of previous review articles.”

At least three of the five authors were involved or continue to be involved in the abortion industry:

The Daily Signal emailed the three authors, but did not receive responses. The report’s two other authors, Dr. Henry J. Peter Ralston and Dr. John Colin Partridge, do not appear to have direct ties to the abortion industry.

In regard to bias, Bauchner wrote to Agresti, “the information we have indicated that authors complied with the [Journal of the American Medical Association’s] conflict of interest requirements in 2005.”

Jim Michalski, a spokesman for the publication, told The Daily Signal that editors would have no additional comment beyond the letter.

Agresti said Bauchner did not address some of his main arguments in favor of the retraction.

“Based on his last email to me, they consider the matter closed,” Agresti said. “I don’t think we will see more action until we can bring enough attention to this.”

“For the editors, they may not see the bias among the authors as serious enough,” Prentice said. “Eleven years have passed. The interpretation of the science is old. They may feel the paper is passé and has been supplanted by modern science.”

Whether a fetus is capable of experiencing pain as a conscious and emotional feeling remains unclear and is subject to great debate, but we cannot deny that the fetal nervous system mounts protective responses to tissue injury. A physiological fetal reaction to painful stimuli occurs from between 16 and 24 weeks’ gestation on. … Evidence is increasing that from the second trimester onwards, the fetus reacts to painful stimuli and that these painful interventions may cause long-term effects.

The 2006 article in Pain asserted:

Multiple lines of evidence thus corroborate that the key mechanisms of consciousness or conscious sensory perception are not dependent on cortical activity. Consistent with this evidence, the responses to noxious stimulation of children with hydranencephaly are purposeful, coordinated, and similar to those of intact children. Further, preterm neonates or adolescents with cortical parenchymal injury mount bio-behavioral responses to pain that are indistinguishable from those of normal controls. Whether consciousness is required for sensory perception has also been questioned by recent studies of adult patients in a persistent vegetative state.

Prentice said he believes the real reason for a retraction by the Journal of the American Medical Association is the conflict of interest, but also sees the interpretation of the science as severely flawed.

“Some people are born without a cortex, but they are able to feel pain and are aware of what is around them,” Prentice said. “Other creatures, birds and some mammals, don’t have a cortex. Would we say they can’t feel pain? Of course not. It’s a scientifically untenable argument.”