Should the Postal Service Handle Your Loans as Well as Your Mail? Elizabeth Warren Thinks So. 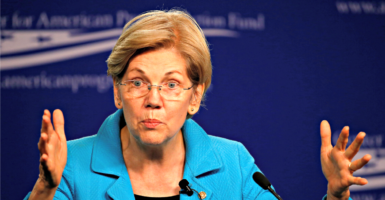 Sen. Elizabeth Warren, D-Mass., here at the Center for American Progress on July 13, 2016, wants the U.S. Postal Service to give you payday loans as well as mail. (Photo: Gary Cameron /Reuters/Newscom)

The Consumer Financial Protection Bureau is inching closer to eliminating private payday lending with restrictive new rules and, some advocates hope, paving the way for the U.S. Postal Service to take over these banking services.

The agency’s liberal supporters, including Sen. Elizabeth Warren, D-Mass., long have wanted to replace the payday lending industry with a government-run alternative. Now, they are pushing to include language in the Democratic Party platform to add banking to the line of services provided by the U.S. Postal Service.

One section (1205) of Dodd-Frank provided for taxpayer-subsidized alternatives to small-dollar loans. Warren, who helped establish the Consumer Financial Protection Bureau in 2011, long has advocated using public entities such as the Postal Service to compete with private payday lenders.

Warren’s expansive vision for a government role in lending effectively would give the Postal Service a banking charter, or as Warren puts it, “nothing fancy, just basic bill paying, check cashing and small dollar loans.”

Supporters of increased regulation claim that short-term credit products trap consumers in cycles of debt by charging interest as high as a 300 percent annual percentage rate.

Yet most payday loans charge simple fees. For example, borrowers are charged a flat $15 fee to borrow $100 for two weeks—an interest charge of 15 percent. The absurd 300 percent rate assumes that a borrower will take out a payday loan every two weeks for an entire year.

Payday lenders have no reason or incentive to bleed their consumers dry. If customers are unable to repay loans, payday lenders will fail.

Payday lending and other short-term credit lenders provide valuable services for nearly 10 million Americans a year who need the loans and are willing and able to pay. Consumers simply would stop using the services if they did not reap any benefits from payday lending.

By claiming payday loans are bad choices for consumers, federal officials at the Consumer Financial Protection Bureau and elsewhere are assuming that Americans who use payday loans can’t make informed financial choices for themselves. Follow this alarming line of reasoning to its conclusion, and you arrive at a state of “consumer protection” whereby the government controls the financial industry.

The federal government is regulating private payday lenders out of business only to turn around and let government-backed entitles, such as the Postal Service, provide banking services. American taxpayers already spend $300 million a year on government-sponsored payday lending that directly competes with private businesses.

If shifting an industry into government control wasn’t bad enough, the Postal Service is especially ill-equipped to handle the additional services. The Postal Service has a dismal track record in maintaining its own business affairs. Since 2007, it has lost nearly $45 billion.

The best way to ensure consumers are served appropriately is to foster competition in private lending markets, not to give banking powers to bureaucrats at the expense of taxpayers.