‘Back to the Soviet Era’: Putin’s New Law Could Lead to Religious Crackdown 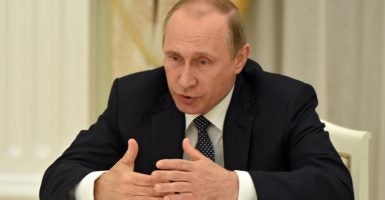 In signing a new anti-terrorism law, Russian President Vladimir Putin could have authority to crack down on non-government-aligned churches, said Archbishop Andrew (Maklakov), administrator of the Russian Orthodox Autonomous Church of America.

The law that Putin signed on July 6 restricts religious proselytizing and imposes heavy fines for doing so. While the law exempts the Russian Orthodox Christian Church, opponents point out that exemption only extends to the Moscow Patriarchate critics say has been entangled with the Russian government since the Soviet era.

There are two sects of Russian Orthodox Christians. The Moscow Patriarchate is the main branch of the church, which had ties to the Russian government going back to the czar era that ended in the early 20th century. During the Soviet era, the autonomous church was established, adhering to Russian Orthodox theology, but completely independent of the government-aligned church.

“As the Russian Federation has drifted back to its Soviet roots more and more over the past 25 years, it has increasingly sought to harass, persecute, and destroy any religious organization that it might consider competition to its own ‘state church,’” the archbishop told The Daily Signal in an email.

The autonomous church in the United States and abroad, “opposes this new law because as an entity not subject to the official state-run church, it is not exempt from the provisions of this law,” he continued. “Rather, it understands that this law is but another weapon in the hands of the neo-Soviet Russian state to dismantle and destroy our church in a way that appears lawful to Western observers and critics.”

The anti-terrorism law prohibits religious gatherings in nonregistered areas, which could reportedly include private homes. It also restricts promoting religion on the Internet. Missionary work or sharing faith without possessing certain documents to do so would lead to fines of up to the equivalent of $765 for a Russian citizen and up to $15,000 for an organization, while a foreign violator would be deported.

“In my opinion, this is just a way for Putin to try to get the band back together,” the Rev. Mark Templet of Saint Peter the Aleut Orthodox Parish in Abita Springs, Louisiana, told The Daily Signal in a phone interview. “It’s about going back to the Soviet era; [Putin] wants the Moscow Patriarchate to stand alone for national identity. We are a fly in the ointment of that because we believe there should be a separation between the state and the church.”

Templet said that in the last decade, the Russian government has seized and shut down more than a dozen Russian Orthodox churches not associated with the Moscow Patriarchate. Still, the autonomous Russian Orthodox Church has 300 registered parishes in Russia, he said.

“They have labeled our people in Russia extremists, which is a word for terrorists, because they want to have only the government-supported Moscow Patriarchate,” Templet said.

The Patriarchal Parishes in the USA, a branch of the Moscow Patriarchate, did not immediately respond to The Daily Signal phone and email inquiries.

The U.S. State Department says it is also troubled by the law.

“The United States is concerned with the Russian Federation’s recent adoption of amendments to its anti-terrorism law, which President Putin signed July 7,” State Department spokesman Nicole Thompson told The Daily Signal in an email. “The amendments include a number of provisions which place greater restrictions on the right to freedom of speech, assembly, and religion, and also introduce criminal penalties for those who do not inform the authorities of alleged violations. Particularly troubling are the amendments dealing with religion and missionary activity.”

“We believe that these new amendments will not better protect Russia’s citizens, but are rather part of a troubling Russian trend of intimidation and harassment of civil society and political activists,” Thompson added.

Supporters of the Russian legislation say the anti-terror bill was in response to the bombing of a jetliner in Egypt in October and the terrorist attacks in Paris last year. The package also puts restrictions on social media, increases sentencing for participating or financing terrorism, lowers the age threshold for prosecuting terrorism from 16 to 14, and issues fines of up to $15,400 for anyone calling for terrorism.

Another controversial aspect of the law was requiring that communications companies provide the Russian government with encrypted data—with potential fines of up to $15,400 for not complying. This so-called “Yarovaya Law” is named after Irina Yarovaya, the Russian politician who wrote the bill.

The Embassy of Russia in Washington, D.C., did not respond to phone and email inquiries from The Daily Signal.

This law will almost certainly be part of the U.S. Commission on International Religious Freedom report on countries, said Faith McDonnell, director of religious liberty for The Institute on Religion and Democracy.

“The law doesn’t do that much to defend from terrorism and only prevents Christians and others who are not Orthodox from preaching and proselytizing,” McDonnell told The Daily Signal in a phone interview. “Given all of our complications with Russia, I’m not sure U.S. government or the United Nations will act on what is being sold on the surface as an anti-terrorism bill. … Russia is slipping back to what it was before.”

McDonnell’s organization was part of a coalition from the International Religious Freedom Roundtable that wrote a July 11 letter to Putin, which said the law could violate international treaties:

We are particularly concerned about the amendments that introduce an entire new section to the Religion Law, imposing strict limits on sharing beliefs, including where and who may share them, and increase extremism punishments. … the Yarovaya Law poses threats to the fundamental human rights and freedoms that are guaranteed by Russia’s Constitution and its international human rights obligations.

The fact that so many groups oppose the law shows how extreme it is, said Travis Weber, director of the Center for Religious Liberty at the Family Research Council.

“Stifling expression and the sharing of one’s faith does not advance security, it takes away from resources that could be used for security,” Weber told The Daily Signal in a phone interview.

The concerns about those promoting terrorism is legitimate, he said.

“Social media and promoting terrorism are not invalid concerns. The U.S. has freedom of speech, with limits. You can’t threaten violence,” Weber said. “The Russian law is overly broad and sweeping and doesn’t target radical Islam.”