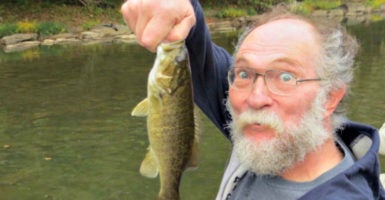 Glenn Foden had a dream for his daughter, Hannah. He saw Hannah having a canine companion to help her maneuver through her struggles with autism.

Foden, an editorial cartoonist for The Daily Signal and other news organizations, began to save for a service dog.

But when the conservative cartoonist died unexpectedly in March at age 60, his widow Teresa and their children put the dream on hold to make ends meet.

Now, with the generosity of two dog breeders and a crowdfunding site, that dream is close to becoming reality. One of Glenn Foden’s political cartoons for The Daily Signal.

Hannah and her twin sister, Emily, were born about eight weeks premature. Hannah had bilateral brain bleeding when she was born, leading to long-term neurological impairment.

Looking back to that time, Teresa Foden chuckles at the memory of dressing the twins in matching Cabbage Patch Kids outfits.

“Since Glenn died, each one of us had things we needed to go forward,” Teresa Foden told The Daily Signal.

A former news reporter, she began picking up editing jobs to keep her busy while Emily left their home in Mount Airy, Maryland, for the West Coast.

“Emily ended in California,” Foden said. “She has her dream job.”

“We each have something to move forward with,” her mother said. “Now it’s time for Hannah’s dog.”

After Glenn Foden’s death, the family no longer could afford to put away money for a service dog.

Teresa Foden got in touch with Stuart Smith and Melinda Barber of Moxie Collies, a kennel in Centralia, Washington, to tell them she didn’t think they could afford a puppy. Smith and Barber responded with generosity.

“We told her the last thing she needed to worry about was paying for the puppy,” Smith told The Daily Signal.

Hannah needs a special dog. A dog with a strong will to learn. That dog is Rosalee. But obtaining Rosalee was only the first obstacle. Rosalee is a puppy, and she must go through approximately two years of intense training as a service dog, costing around $4,000, Teresa Foden said.

On July 16, she created a GoFundMe account to raise the money for Rosalee’s training. On it, she tells the story of her late husband’s dream for Hannah.

“Rosalee is extremely bidable, meaning she will take direction,” Smith said, and this makes Rosalee a strong candidate for service.

“We haven’t had what we thought would be a really good prospect in a while,” Smith said, “and we’re not going to place a dog, especially in a service home, that isn’t perfectly suited for the task.”

Upon completion of training, Rosalee would be able to serve Hannah in several ways. The most important to Hannah’s mother, though, is emotional support.

Service dogs such as Rosalee are known to help relieve frustration, anger, and anxiety.

When Hannah is in need of comfort, a simple hand gesture will signal that to Rosalee.

“If [Hannah] has a panic attack, she will lay on the ground and Rosalee will lay on her chest for pressure therapy,” Foden said.

She also noted the importance of Rosalee’s ability to help her daughter cross streets:

Hannah rarely realizes when she drops things, her mother says, and it happens quite frequently.

“If she drops her medication, Rosalee will bring it to her. It’s amazing what you can do with these dogs.”

By starting the GoFundMe account, Teresa Foden hopes to cover the cost of training Rosalee.

On the fundraising page, she records the words of Hannah: “Rosalee will help me be big.” Glenn and Teresa Foden in a family photo.