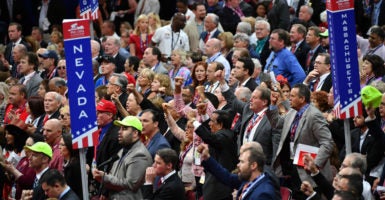 “One of the many lessons that has come from this experience is to always be ready for people who want to do bad things to our platform,” delegate Ben Marchi tells The Daily Signal. (Photo: Kevin Dietsch/UPI/Newscom)

CLEVELAND—A dramatic effort to change the GOP’s stance on LGBT issues ended with a whimper Monday as the Republican National Convention kicked off officially.

The document, adopted Monday on the floor of Quicken Loans Arena, codifies the traditional definition of marriage and denounces the administration’s school bathroom directive.

Last week, it wasn’t clear if the platform would be agreed to at all.

Delegates and operatives associated with American Unity Fund, an LGBT lobbying organization bankrolled by billionaire Paul Singer, mounted an operation to completely scrap the party’s platform supporting traditional marriage in favor of a shorter document that didn’t include any language about marriage.

The plan hinged on a parliamentary measure known as a minority report. It would trigger a messy debate on the floor of the convention if just 28 of the 112 delegates signed onto the measure.

“When we found out about it, we alerted the people who signed it that the one page ‘statement of principle’ didn’t contain support for traditional marriage and family values,” Indiana delegate Jim Bopp told The Daily Signal.

By the time the convention convened Monday, more than half of the 37 delegates who had signed the minority report removed their names, delegates Bopp, Matheson, and Ben Marchi told The Daily Signal. The loss of signatures killed the initiative.

“It wasn’t even offered,” Sen. John Barrasso, R-Wyo., chairman of the platform committee, said. That’s evidence, he told The Daily Signal, that “people are happy with the platform. It’s a conservative platform. It represents our party’s view.”

Essentially the party’s vision statement, the platform stakes out official positions on a wide range of issues, touching on everything from abortion to international affairs. Every four years, the party hammers together a new platform.

Opponents of the LGBT effort, however, were more than willing to discuss the issue.

Marchi, who described the minority report tactic as “the filthiest thing I’ve ever seen in politics,” said the episode should put conservatives on alert.

“One of the many lessons that has come from this experience is to always be ready for people who want to do bad things to our platform,” Marchi, a delegate from Maryland, told The Daily Signal. “We need to prepare for it because they are. We’ve got to do a better job than they do.”

The platform was easily adopted on the floor of the convention Monday afternoon by voice vote. The party vision statement will remain in effect until 2020 at the next Republican convention.