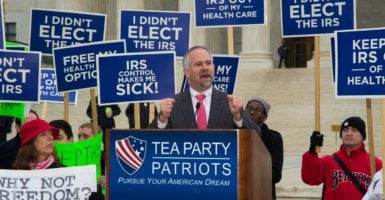 The House Freedom Caucus has launched a pressure play against Republican leadership in an effort to force a vote on impeaching John Koskinen, commissioner of the Internal Revenue Service.

Before Congress skipped town Thursday for a seven-week recess, Reps. Tim Huelskamp, R-Kan., and John Fleming, R-La., filed a parliamentary measure known as a privileged resolution on behalf of the Freedom Caucus.

The effort hinges on maximizing public pressure on lawmakers during their summer recess, Huelskamp told The Daily Signal. Conservatives hope that populist opposition to the IRS in congressional districts will translate into support for impeachment on Capitol Hill.

But when Congress returns Sept. 6., lawmakers have two legislative days to vote on either impeaching Koskinen or tabling the measure.

And by going straight to the floor, the Freedom Caucus has bypassed the regular committee process, bucked GOP leadership, and widened an expanding chasm within Republican ranks.

Establishment aides describe the effort as a publicity stunt while their conservative counterparts say it is part of a greater effort to overcome leadership’s opposition to impeachment.

House Speaker Paul Ryan, R-Wis., downplayed any party infighting at a Thursday press conference, saying impeachment was something he and “a lot of our members haven’t really focused on.”

Though Ryan opposes the IRS chief, he doesn’t support impeachment. In April the speaker said that Republicans should wait until they control the White House to replace Koskinen.

“We think our leadership has been too timid to go after corruption,” Fleming told The Daily Signal, “and often times, they bow to the liberal progressive demands of the White House instead of standing up for our values.”

Frustrated by that mentality, Fleming said, conservatives decided to go it alone.

“It raises a fundamental question: Are folks in Washington above the law?” Huelskamp told The Daily Signal. “If Congress is going to matter in our constitutional republic, you can’t have members of the administration lying, misleading, and stonewalling Congress.”

Firing Koskinen has been a top priority for the Freedom Caucus since last October when Rep. Jason Chaffetz, R-Utah, officially began the impeachment process. Since then, conservatives have regularly complained that leadership has slowed work on impeachment in committee.

By calling for an up and down vote on the floor to decide the fate of Koskinen’s career, conservatives have opted to bypass the committee process and go around Ryan.

Conservatives say that Koskinen’s misconduct warrants their defiance of Ryan.

They argue that the IRS infringed on free speech, unfairly targeting conservative groups, and they blamed Koskinen for obstructing a congressional investigation into the agency’s conduct.

Koskinen described any allegations of wrongdoing as “unwarranted” and the impeachment articles as being “without merit” in a written May statement to the Judiciary Committee.

A senior GOP aide says conservative choice of tactics show that is more of a messaging than a serious effort at removing the tax chief. The privileged resolution—which is necessary to force a vote—will expire next week because the House remains in a symbolic pro-forma session, the aide said, “and they know that.”

Fleming wasn’t clear if the resolution would expire during recess. But if it did, he said the Freedom Caucus planned to file a second one again in September.

While the White House continues to describe the articles of impeachment as baseless, Koskinen has hired his own defense lawyer, Reginald Brown of Wilmer Cutler Pickering Hale & Dorr in Washington.

Koskinen’s lawyer, in a statement to Bloomberg News, described the Freedom Caucus case as an “unfortunately repeated conspiracy theory that was long ago discredited.”

The administration has long maintained that the IRS tax chief is innocent of any criminal or professional misconduct.

If impeached by the House, Koskinen would face a trial in the Senate. He’d become just the 20th federal official to be put on congressional trial in American history.

The last Cabinet official to be impeached was Secretary of War William Belknap in 1876. Belknap was removed from office for taking kickbacks in exchange for awarding lucrative contracts for arms sales.