Number of Islamist Terror Plots Against the US Rises to 89: Proactive Approach to Terrorism Needed 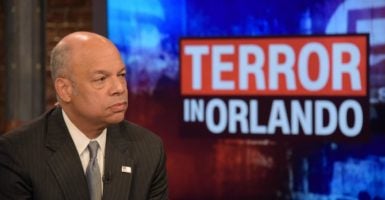 Since the terrorist attack on 9/11, 89 terrorist plots against the U.S. homeland have been uncovered. (Photo: Jetta Disco/Zuma Press/Newscom)

The Heritage Foundation is regrettably adding three more terrorist plots to the list of Islamist terrorists plots or attacks against the U.S. homeland since 9/11, bringing the total to 89.

The first plot to be added was committed by 21-year-old Munir Abdulkader, who, according to documents recently unsealed by the Department of Justice, pled guilty to planning an attack on police officers and a member of the military in southern Ohio. Because the arrest was in May 2015, this plot will be added as the 71st plot on the U.S. since 9/11.

Beginning in July 2014, Abdulkader started expressing his support for ISIS on Twitter. By May 2015, Abdulkader was in communication with a member of ISIS overseas, Junaid Hussain. Hussain directed Abdulkader to forego traveling to Syria and launch a domestic attack within the U.S.

Abdulkader planned to kidnap and execute the members of a local U.S. military installation, then attack a local police station with firearms and Molotov cocktails. On May 20, 2015, Abdulkader visited a shooting range to learn how to operate and practice shooting certain guns. Abdulkader was arrested on May 21 after purchasing an AK-47 he intended to use in his attack.

The second plot to be added is that of Mahin Khan. Khan is an 18-year-old from Tucson who sought to attack a local motor vehicle office and possibly a military recruiting center.

He sought weapons and bomb-making instructions from separate individuals—including one unnamed individual in California and a second individual named Abid Mansoor, who claimed to be part of the terrorist group Tehrik-e Taliban Pakistan. Khan claimed to be an “American jihadist who supports IS” and “a ISIL and TTP supporter looking to perform a MO,” or martyrdom operation.

The FBI and the Department of Justice have yet to release information on the case, though the arrest was the outcome of an investigation by the local Joint Terrorism Task Force headed by the FBI. Only Arizona has released information on the case and has done so in a highly redacted document. Khan is charged with Arizona state terrorism offenses.

While more details will likely be forthcoming from both Arizona prosecutors and the Department of Justice, this evidence is enough to add Khan as the 88th plot to the Heritage list.

The third plot was organized by a former member of the U.S. Army National Guard, Mohamed Bailor Jalloh, who was arrested on July 2 for providing material support to ISIS.

Jalloh attempted to purchase weapons, believing they were going to be used in an attack within the U.S. This will be the 89th terror plot or attack by those inspired by Islamist terrorists since 9/11.

According to the criminal complaint, 26-year-old Jalloh left the National Guard after being introduced to the lectures of the former leader of Al-Qaeda in the Arabian Peninsula leader, Anwar al-Awlaki.

Through the investigation Jalloh noted to an FBI confidential source his affinity for the shooters in Chattanooga, Tennessee, and how he too thought about conducting an attack on military personnel, such as the one that took place at Fort Hood in 2009. Jalloh later went on to identify Pamela Geller, the organizer of the “Draw the Prophet Muhammad” contest, as a target.

Jalloh also told confidential sources about his knowledge of guns and that he had a family member capable of obtaining AK-47 type weapons. Jalloh even purchased a 9 mm handgun in February. Through the investigation it was determined Jalloh maintained a social media account that supported Islamist extremists and those who support ISIS. Jalloh was arrested by the FBI after purchasing and test firing a Stag Arms rifle.

These three cases bring the number of terrorist incidents since the start of 2015 to 25, with 17 last year and eight so far this year. This is the most active period of terrorist activity in the U.S. since 9/11, with the growth in plots linked to the rise of ISIS. At least 21 of the 25 plots in the past year and half have been at least inspired by ISIS. Some, such as Abdulkader, have had direct contact and direction from ISIS operatives.

The U.S. must do more to defeat ISIS abroad if it is to deal with Islamist terrorism at home. Congress should also ensure U.S. law enforcement and intelligence communities have the resources and tools they need to stop terrorism before it strikes like they have in these three cases. In this period of heightened terrorism at home and across the world, the U.S. must also continue to pursue closer counterterrorism relationships with allies and partners.

The U.S. must be vigilant and active in its own defense now more than ever.

This report has been modified to correct the spelling of Munir Abdulkader and Mahin Khan.