What’s Behind Obama’s Obsession With the Public Option 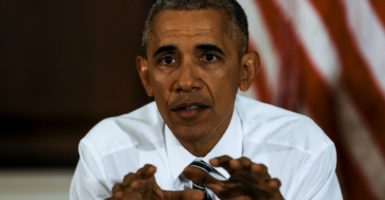 The president’s latest appeal for congressional creation of a “public option” is no more convincing today than it was when he originally proposed it. (Photo: Aude Guerrucci/Zuma Press/Newscom)

President Barack Obama is calling for the resurrection of his failed “public option” ( a “Medicare-like” plan) to compete directly against private health  plans in his government-run health insurance exchanges.

“The public plan did not make it into the final legislation,” the president writes in the Journal of the American Medical Association. “Now, based on the experience with the ACA [Affordable Care Act], I think Congress should revisit a public plan to compete alongside private insurers in areas of the country where competition is limited. Adding a public plan in such areas would strengthen the Marketplace approach, giving consumers more affordable options while also creating savings for the federal government.”

The Left’s Long Pursuit of a Public Option

The president’s latest appeal for congressional creation of a “public option” is no more convincing today than it was when he originally proposed it. It was included in the very first legislative version of Obamacare in 2009, and by 2010 it became a standardized feature of leftist health policy in Congress.

The provision was, however, unable to secure enough congressional Democratic support. The final version of Obamacare was enacted without the provision. The national health law eventually passed on a narrowly partisan basis, in the teeth of popular opposition,  and further polarized the country.

But there’s a reason Obama is circling back to the public option, even though he couldn’t get it through Congress.

If a public option became part of government-run health, the Health and Human Services secretary would establish such a plan, set its benefits, and fix its payment rates. While private plans must negotiate market rates with doctors and hospitals, a Medicare-like “public option” would fix payment rates by fiat, well below the rates that would otherwise prevail in a real market.

There’s an important backstory to this initiative. The combo of a “public option” in a “public exchange” was originally developed by liberal health policy analysts as a dual action mechanism to secure a “single payer” system: a full-scale government monopoly.

Backed by the full power of the government, and fixing payment rates below normal market levels, the “public option” would crowd out private coverage, resulting in greater concentration in the market, less choice for patients, and less competition among plans, until only the government health plan would remain. Voila, monopoly!

Ultimately, the real point of the “public option” is to destroy private health insurance, crowding it out through administrative, regulatory, and financial disadvantages, and to insulate it from real free market competition on a level playing field.

Aside from other concerns, any public option would involve real financial risk. Private plans, in a properly functioning market, assume and manage the financial risks.

But under the very first legislative version of Obamacare, specifically Section 221 of the Tri-Committee Draft Proposal for Health Care Reform, the taxpayers were to be stuck with entire risk of the public plan.

In June 23, 2009, testimony, I told the House Education and Labor Committee: “Since private health plans competing with the public plan have no such taxpayer guarantee, regardless of the wisdom or folly of providing such a guarantee, the public plan would have an advantage incompatible with the goal of a level playing field.”

Using  a market mechanism, like a “health insurance exchange,” then adding a “public option” to undercut private plans and destroy a competitive private market was a political strategy.  All the public relations rhetoric about expanded “consumer choice,” promoting “market competition,” and keeping private plans “honest” was, of course, classic boob bait.

In a sense, the president’s call for a reintroduction of a public plan is redundant. Obamacare itself is a public option. The federal government mandates coverage; defines what plans are permissible; determines what health benefits, medical procedures or treatments must be covered; what levels of coverage are acceptable; and what copayments and deductibles are allowable.

For the Obama administration and its allies in Congress and elsewhere, the law secures the main objective: a high degree of political control over the health care sector of the economy.