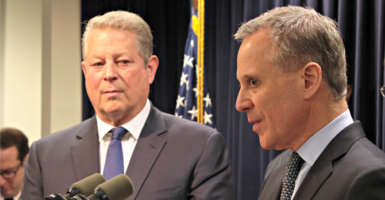 State government figures spearheading an effort to obtain documents from scientists and researchers who dissent from the Obama administration’s position on climate change are being asked, once again, to come clean about their relationships with environmental organizations.

But this time around, New York Attorney General Eric Schneiderman and Massachusetts Attorney General Maura Healey have only two weeks to comply with a demand for information from a House committee that the two Democrats have resisted previously.

That’s because the demand comes in the form of subpoenas issued Wednesday to Schneiderman, Healey, and eight environmental advocacy groups. The House Committee on Science, Space, and Technology took the action after being rebuffed in previous efforts.

In response, a spokesman for Schneiderman lashed out at the committee as “radical Republican House members” with “zero credibility” who are trying to “block a serious law enforcement investigation.”

On March 29, state attorneys general calling themselves AGs United for Clean Power held a press conference in New York with former Vice President Al Gore to announce formation of “an unprecedented coalition of top law enforcement” that would “defend climate change progress made under President Obama.”

All but one of the attorneys general are Democrats.

Some of the elected officials, also dubbed the Green 20, have subpoenaed documents, communications, and research in an effort to acquire the work material of more than 100 academic institutions, nonprofit organizations, and individual scientists, the House committee notes.

These organizations and individuals were targeted because they questioned the merits of President Barack Obama’s climate change agenda, the panel says.

On July 6, Smith sent letters to Schneiderman, Healey, and the environmental groups now on the receiving end of the subpoenas. He reminded them of his May 18 and June 20 requests for documents and communications.

Smith set a deadline of noon July 13 for compliance. The committee issued the subpoenas when the state attorneys general and the environmental groups declined to comply.

The Daily Signal sought comment from Schneiderman’s office in New York and Healey’s office in Massachusetts.

“The extent to which Chairman Smith and Republican committee leadership, at the behest of Big Oil, [are] attacking the legal authority of state attorneys general to investigate whether major corporations misled investors and consumers is very troubling, and an affront to states’ rights,” Healey spokeswoman Cyndi Roy Gonzalez said in an email to The Daily Signal, adding:

This isn’t a fight about the First Amendment because the First Amendment doesn’t protect false and misleading speech. Our office seeks only to understand what Exxon’s own scientists knew about the impact of burning fossil fuels on climate change and on Exxon’s business and assets, when they knew it, and what they told the public. Congress does not have the authority to interfere with a state inquiry into whether a private company violated state laws, and we will continue to fight any and all efforts to stop our investigation.

Schneiderman’s office did not respond, but a spokesman for the New York attorney general, Eric Soufer, released this statement:

The American public will wake up tomorrow morning shaking their heads when they learn that a small group of radical Republican House members is trying to block a serious law enforcement investigation into potential fraud at Exxon. Chairman Smith and his allies have zero credibility on this issue, and are either unwilling or unable to grasp that the singular purpose of these investigations is to determine whether Exxon committed serious violations of state securities fraud, business fraud, and consumer fraud laws.

This committee has no authority to interfere with these state law enforcement investigations, and whether they issue a subpoena or not, this Attorney General [Schneiderman] will not be intimidated or deterred from ensuring that every New Yorker receives the full protection of state laws.

Where the New York attorney general sees “serious law enforcement,” however, others see an assault on free speech rights and honest scientific inquiry.

“The state attorneys general who are spearheading the green witch hunt are not just sabotaging Americans’ First Amendment rights. They are carrying out a frontal assault on the fundamentals of scientific inquiry,” Bonner Cohen, senior fellow at the National Center for Public Policy Research, told The Daily Signal.

In saying the science is ‘settled’ on climate change, they are only revealing their colossal ignorance of what science is all about.  The science isn’t settled on anything. What we think we know about biology, chemistry, physics, astronomy, and, yes, climate science, is constantly undergoing revision resulting from new findings and discoveries. What’s really going on here is the ruling class telling the rest of us to shut up and do as we are told. And if we don’t, there’ll be a knock at the door.

In response to the House committee’s subpoena, Ken Kimmell, president of the Union of Concerned Scientists, released a statement challenging the congressional investigation.

“Chairman Smith’s subpoena is an abuse of power that goes way beyond the House Science Committee’s jurisdiction and amounts to nothing more than harassment,” Kimmell said, adding:

By attempting to interfere with the attorneys general investigations, Chairman Smith directly undermines efforts to hold Exxon Mobil accountable for misrepresenting climate science. It’s also just plain wrong to investigate a nonprofit for doing its job—in this case, providing public officials with science and evidence to hold fossil fuel companies accountable for deception on climate change, one of the world’s most pressing problems.

But Hans von Spakovsky, a senior legal fellow at The Heritage Foundation who has tracked the story, said he detected hypocrisy.

“The reaction of the state attorneys general shows what total hypocrites they are,” von Spakovsky told The Daily Signal. “They have clearly conspired with environmental groups to initiate these outrageous investigations and prosecutions of anyone who doesn’t agree with them about an unproven, disputed scientific theory, including voluminous, harassing subpoenas. Yet when they are targeted with inquiries about what they are doing, suddenly they are outraged.”

Committee members insist Schneiderman, Healey, and the other state attorneys general, along with the environmental groups, are at fault for jeopardizing free speech and honest scientific inquiry about whether human activity has resulted in global warming—what adherents to the idea now call climate change.

“Since March, these attorneys general have attempted to use questionable legal tactics to force the production of documents and communications from a broad group of scientists, companies, and nonprofit organizations,” said Rep. Brian Babin, R-Texas, who chairs the space subcommittee.

“These actions are an attempt to chill the scientific research of those who do not support the attorneys general and environmental groups’ political positions,” Babin said in a formal statement adding:

These actions amount to a political attack rather than a serious inquiry based on the law. Today’s action by the Science Committee and Chairman Smith sustains the commitment to protect the First Amendment rights of the individuals and groups targeted by the attorneys general and environmental activists.

If the committee does not receive a response from Schneiderman, Healy, or any of the green groups, it could hold a vote on whether a “contempt of Congress” finding should be sent to the full House.