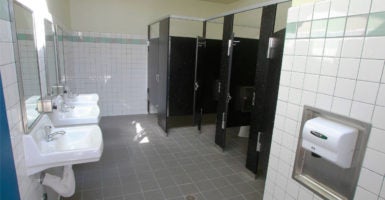 Individuals around the country called the White House comment line on Tuesday to say “no” to President Barack Obama’s transgender bathroom mandate.

The “United We Stand” campaign was organized in response to the Obama administration’s “Dear Colleague” letter on transgender students.

The letter sent to schools in May from the departments of Education and Justice states, among other measures, that schools should open up bathrooms and locker rooms to individuals based on their chosen gender identity, not their biological sex. Schools that don’t comply face loss of federal funding.

Bethany Kozma, a stay-at-home mom from Fairfax County, Virginia, who organized the campaign, told The Daily Signal that she is “very concerned about the possible abuse that this policy could allow for.”

Kozma sought the advice of Lisa Van Riper, a former college professor of hers, on how to take action. Kozma started calling state and local representatives and met with her daughter’s vice principal to show concern and opposition to the mandate.

On July 12, at 1 p.m. EST, Kozma and others called the White House comment line with a message for the president.

“Please respectfully tell the White House comment line volunteer who answers your call that the president’s bathroom policies are endangering the safety, security, and privacy of your/our children,” Kozma said in an email sent Thursday to “fellow patriots.”

“We have the freedom to disagree with our elected officials,” Kozma told The Daily Signal. “I started thinking about it … President Obama’s not going to only just listen to me, but maybe if we come together in unison at one time, at the same date and time … it can’t be ignored.”

Van Riper, director of honors and public affairs at North Greenville University in South Carolina, told The Daily Signal that she placed a phone call to the White House comment line on Tuesday because children are not ready or equipped to be exposed to issues like this.

“It is time now for young parents to understand that they are in charge of the future of their children,” Van Riper said. “These children are not able to defend themselves. … I think that parents have got to speak now for children who cannot speak for themselves.”

Pam Duffy, who works in the development department at Family Policy Alliance, Focus on the Family’s policy arm, says speaking up on this issue is important.

“We’re there to support [Kozma] as our team can,” Duffy, who made a phone call herself, told The Daily Signal. She says the Family Policy Alliance sent out emails notifying thousands of constituents to make calls to the White House.

“When I finally got through, the lady said, ‘The phones have been jumping off the walls’ about this issue,” Kozma said.

Calling the White House comment line is the first step, Kozma says, and the movement will not stop at the White House, but will continue with Congress, state and local officials, school boards, superintendents, and principals.

“I don’t think that [Obama’s] going to change his policy by overwhelming the White House comment line, but I do think that it’s also a great education tool to educate folks on what’s happening and why we need to stand up and unite together.”

Victoria Cobb, president of The Family Foundation of Virginia, said in an email to The Daily Signal, “We are going to need a lot more Bethanys to stand up and be heard.” Cobb added:

It’s becoming more clear each day that everyday Americans just like Bethany are not going to sit idly by as the president puts the privacy and safety of our kids in jeopardy. It is going to take moms and dads across the nation to be just like her and fight for their kids from the local school board to the White House. We can compassionately address the needs of kids struggling with sexual identity while also protecting the rights of all the other kids in schools.