The Postal Service Needs Transformational Reform to Survive, but Hope for Reform Is Fading 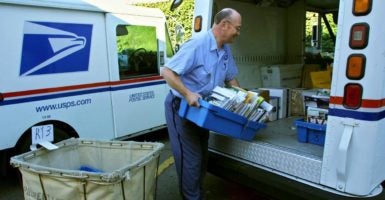 Like the Cheshire Cat in Alice in Wonderland, postal reform in Congress seems to be fading fast with each new iteration. The latest version—put together by a bipartisan group of House lawmakers led by Rep. Jason Chaffetz, R-Utah—is the faintest yet.

The bill, set to be marked up by the House Oversight Committee today, falls far short of what it needed to resolve the critical threats faced by the Postal Service—or the taxpayers who implicitly back it up.

The Postal Service’s problems are well documented. It has not made a profit in nine years, losing close to $57 billion during that time. And its business has been in free fall—with the volume of first-class mail plummeting 40 percent over the past 10 years. There is a real chance the Postal Service will not survive this collapse. And if it is to survive, transformational changes are necessary.

The Chaffetz plan offers no such transformation. Among its provisions, it would:

Some of these reforms are modest steps in the right direction (cluster boxes), others move the wrong way (making postal leadership more political), and still others just shift costs elsewhere (Medicare).

But more telling is what is not in this proposal. Importantly, the sponsors stood firm on requiring full payment for retiree health benefits, as opposed to the 80 percent called for in the leading Senate bill. And there is no mention of a postal entry into the banking business—a step which would be a sure disaster for all involved.

But this trimmed-down reform bill also lacks the substantive reforms that are needed to give the Postal Service a chance at survival.

In 2011, for instance, the same committee adopted a bill that would create a “base closure” style authority to close unneeded post offices, lift the congressional mandate that mail be delivered six days per week, normalize postal pay and benefits to be comparable to other businesses, end no-layoff clauses in union contracts, and establish a control board with authority to make other changes.

Congressional leaders have backed far away from such substantive reforms. Year after year, the reforms in postal legislation have become weaker. To a large extent, this is understandable: the political pressures to continue the postal status quo are daunting. But whatever the politics, significant reform is needed to save taxpayers from the potentially devastating cost of a postal collapse. And the changes Congress is considering today are just not enough to avoid that.