He Rented Out His Condo After Losing His Job. Now Austin Wants to Ban That. 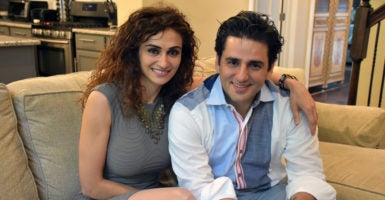 Ahmad and Marwa Zaatari rent out their four-bedroom condo in Austin, Texas, using Airbnb. The rental property provides the family with additional income. However, the Austin City Council passed new rules for short-term rentals in February, which the Zaataris are challenging in court. (Photo: Texas Public Policy Foundation)

It’s a fact that’s not lost on him—Zaatari has now lived in Austin longer than he’s lived in any other place, including his native Lebanon.

But now, because of new regulations on rental properties put in place by the City Council, he’s not sure whether he and his family can stay.

Zaatari, 34, immigrated to the United States from Lebanon in July 1999 in search of “the best education I could get.”

In Lebanon, he said, “political bosses” control who applies to colleges and who gets accepted.

Though he was a top student, Zaatari said he wasn’t able to apply to a university in Lebanon, so he turned to the U.S., where some of his family lived.

He was accepted to a university in Denver and went to school there for a year before transferring to the University of Texas at Austin to complete his undergraduate education and, later, earn his master’s degree in mechanical engineering.

He’s lived in Austin, the capital of Texas, ever since.

“This is the city I love,” he told The Daily Signal.

Zaatari and his wife, Marwa, purchased a four-bedroom condo in South Austin in December 2014, just months after having their first child.

But in 2015, Zaatari lost his job working for a tech startup, and during the time he was looking for new employment, Zaatari began to worry about what was going to happen to his family.

Zaatari and his wife had moved their family closer to downtown Austin so they could be closer to work. But after losing his job, he wondered if they were going to be able to afford their condo.

So he started looking into using his house as a short-term rental. The living room and kitchen at the South Austin condo Ahmad Zaatari and his family rent out using Airbnb. The Austin City Council will phase out Type 2 rentals, or those where the owner does not live, by 2022. (Photo: Texas Public Policy Foundation)

Zaatari moved his family into a smaller apartment and spruced up the condo to make it attractive for renters.

In May 2015, he received a license from the city that governs rentals of under 30 days. By September 2015, Zaatari had his first renter.

Zaatari now rents his condo through Airbnb to people of all stripes—families who want to move to Austin and check out the neighborhood first, startups trying to break into the business scene, and newcomers to the city who secured jobs but haven’t had the time to look for an apartment just yet.

Zaatari is close to breaking even with the money he spent to prepare his house for renters. But now, Zaatari fears he and others renting out their homes in Austin won’t be able to rely on that additional income for much longer.

Austin homeowners looking to rent out their houses for fewer than 30 days must obtain a license costing $285—$235 for a renewal—in one of three different categories, Type 1 and 1A, Type 2, and Type 3, depending on the type of property they will be renting. They also must pay hotel occupancy taxes.

Zaatari applied for a Type 2 license, which is for residential rentals the owner doesn’t claim as his or her main dwelling, or homestead, according to city regulations.

In November 2015, the Austin City Council placed a temporary moratorium on new licenses for Type 2 short-term rentals. In February, the City Council voted 9-2 to amend the law and implement new regulations for those rentals, including a ban on them by 2022.

The council’s new rules created an occupancy limit of no more than 10 related adults or six unrelated adults in a short-term rental and prohibited “outdoor assemblies”—weddings, bachelor or bachelorette parties, concerts, or “group activities other than sleeping”—from 10 p.m. to 7 a.m.

Outdoor gatherings of more than six adults also are prohibited from the hours of 7 a.m. to 10 p.m. And the new rules allow inspectors to enter and survey properties “at all reasonable times.”

In response to the new rules for Type 2 short-term rentals, the Austin-based Texas Public Policy Foundation filed a lawsuit challenging the constitutionality of the regulations.

“The ordinances infringe upon the rights to privacy and assembly,” Robert Henneke, general counsel for the group, told The Daily Signal. “It prohibits more than six people from being outside a short-term rental, period. Any time of day. Any activity—barbecue, wiffle ball game, sitting around a pool. More than six people is a violation.”

Henneke said the City Council’s revisions not only are unconstitutional but unnecessary, since the city already has ordinances on the books to address noise and disturbances of the peace.

“Enforce the rules you have, don’t come up with silly restrictions that target one use of a property,” he said. “There may be one or two bad operators from time to time, but instead of using existing ordinances and existing rules to deal with the outliers, the city has come in and chosen to target an entire industry that is operating lawfully.”

A representative for Austin Mayor Steve Adler, a Democrat, said the mayor could not comment on the short-term rental ban because of the ongoing lawsuit.

However, Austin Code Director Carl Smart said in a previous statement that the City Council was aiming to help the city to “better manage vacation rentals and to better respond to inappropriate behaviors” at rental properties.

Zaatari, though, said the vast majority of property owners who have short-term rental licenses are law-abiding citizens. To address renters’ potential inappropriate behavior, Zaatari asked his neighbors to reach out directly to him with problems.

Over the last nine months, he said, he has yet to hear any complaints.

“We don’t want to turn our neighborhoods into frat houses. This is not a place for me to go and make a party house, and we’re being portrayed as doing that,” Zaatari said. “Maybe some people do that, but I don’t think it’s at the level where it needs to be regulated.” ‘An Incentive to Operate Unlawfully’

Despite Zaatari’s assurances, the city maintains that the new regulations for short-term rentals are needed to tamp down on “party houses” that have sprouted up in the city. However, The Daily Signal’s review of complaints filed against rental properties show that most were related to unlicensed activity.

According to a 2015 study conducted by Austin’s city manager, 252 complaints were filed against Type 2 short-term rentals from October 2012 to August 2015.

Of those complaints, 30 percent were logged because the property owners didn’t have a short-term rental license.

Henneke predicts the city will see an uptick in unlicensed short-term rentals as more Austin homeowners choose to forego a license in response to the new regulations.

“The City Council adopted a solution in search of a problem,” Henneke said of the short-term rental regulations. “A lot of the city’s complaints were problems of unlawful operators. In adopting this onerous regulatory scheme, you’re creating an incentive for people to operate unlawfully, either because they can’t get a license, or the burdens are too onerous for people to want to comply with the law.”

“If anything, the city is perpetuating their own problem by regulating so heavily that it creates an incentive for people to start operating unlawfully,” he said.

For many, the concept of short-term rentals is nothing new. For decades, vacationers have been swapping hotel stays for rentals at the beach or in the mountains.

Following the rise of  businesses such as Airbnb, HomeAway, and VRBO, or Vacation Rentals by Owner—which make it easier for renters to connect with property owners—cities and states have begun to regulate short-term rentals.

“It’s not a new concept,” Henneke said of short-term rentals, “but it is certainly new to have the government step in in this heavy-handed way and try to take away the economic viability of individual private property, and also to impose onerous, heavy-handed regulations that regulate what people can do within the privacy of their own residence.” However, Arizona Gov. Doug Ducey, a Republican, signed a new law in May requiring cities to allow short-term rentals such as Airbnb.

In Denver, property owners now are required to obtain a short-term rental license before they can rent out their property for under 30 days.

And in San Francisco, a new ordinance requires companies such as Airbnb and VRBO to list rentals only from residents who are registered with the city. The companies face $1,000 fines for every property owner who is unregistered and rents his or her property using their platform.

According to the Short Term Rental Advocacy Center, a group created by Airbnb, HomeAway, TripAdvisor, and FlipKey, short-term rentals in cities across the country have generated millions of dollars in economic activity and created thousands of jobs.

Salim Furth, a research fellow in macroeconomics at The Heritage Foundation, said short-term rentals not only provide benefits for local economies, but also provide people with a “safety net.”

“It’s a free-market safety net for people who are middle class and need to make more money,” he told The Daily Signal, continuing: The Austin City Council passed new regulations to a short-term rental ordinance in February. Including a rule to phase out Type 2 short-term rentals, like that owned by Ahmad and Marwa Zaatari, in 2022. (Photo: Texas Public Policy Foundation)

‘Our Rights Are Being Stomped On’

According to Austin city officials, 434 Type 2 licenses—the kind of license Zaatari has—were active as of August 2015.

The city will phase out those licenses by 2022.

Zaatari, the lead plaintiff in the Texas Public Policy Foundation’s lawsuit against the city, said the actions of the City Council are oppressive.

“It’s my house. I am using it within the law, and the majority shouldn’t be able to suppress the minority and take away their constitutional rights,” Zaatari said. “If the U.S. was like that, a lot of people like me wouldn’t have moved here.”

Zaatari said he and other property owners tried to engage in discussions with city officials and even asked for data to back up their assertions that short-term rentals were causing disturbances.

But after a certain point, he said, city officials stopped engaging.

Now he worries that in the coming years, he’ll be forced to move out of Austin because losing his ability to rent out his condo for fewer than 30 days will lead to a “huge loss” of income.

Zaatari is not alone.

“I know a lot of people whose income depends on this. It’s really unfair. They’ve been paying their taxes,” he said. “They’ve been good, law-abiding citizens trying to communicate our concerns to the city, and we’re not being heard, and our rights are being stomped on.”