As Obama Speaks in Dallas, Police Groups Question His Support 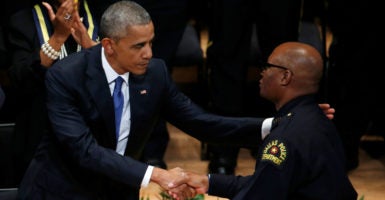 As President Barack Obama visited Dallas on Tuesday to speak at the memorial service for five slain police officers there, some law enforcement advocates faulted his legacy on the issue as negative.

“Because these are not isolated incidents. They’re symptomatic of a broader set of racial disparities that exist in our criminal justice system,” @Potus says.

“It’s a consistent pattern that whenever there is violence, he has repeatedly failed to wait until the facts are known before giving his opinion that implies cops are racists and that pollutes the environment around the case,” Ron Hosko, president of the Law Enforcement Legal Defense Fund, told The Daily Signal in a telephone interview.

“He has put his thumb on the scales of justice and has simultaneously inflamed matters,” Hosko said. “He is no friend to law enforcement.”

During his remarks in Dallas, the president repeatedly praised police but also asserted that the concerns of peaceful protesters are legitimate.

“We know that an overwhelming majority of police officers do an incredibly hard and dangerous job fairly and professionally. They are deserving of our respect and not our scorn,” Obama said, adding:

When anyone, no matter how good their intentions may be, paints all police as bias or bigoted, we undermine those officers we depend on for our safety. As for those who use rhetoric suggesting harm to police, even if they don’t act on it themselves, they not only make the job of police officers more dangerous, they do a disservice to the very cause of justice they claim to promote.

The president added: “America, we know bias remains. We know it. … No institution is entirely immune. That includes police departments.”

When mothers and fathers raise their kids right and have ‘the talk’ about how to respond to a police officer—‘Yes, sir, no sir’—but fear that something terrible may happen when their child walks out the door, still fear that kids being stupid and not quite doing things right might end in tragedy—when all this takes place more than 50 years after the passage of the Civil Rights Act, we can’t just simply turn away and dismiss those in peaceful protest as troublemakers or paranoid. We can’t simply dismiss it as a symptom of political correctness or reverse racism.

On Wednesday, the president is scheduled to meet with a group of law enforcement officials, civil rights activists, and local political leaders about rebuilding trust between police departments and their communities, White House press secretary Josh Earnest said.

Earnest said It’s time for police departments around the country to implement the recommendations of the White House Task Force on 21st Century Policing. That report called for a greater emphasis on police forces having community-based partnerships with schools, businesses, and neighborhood organizations; greater transparency and oversight; and increased officer training.

Jon Adler, president of the Federal Law Enforcement Officers Association, on Monday publicly asked Obama to use blue lights to illuminate the White House in honor of the fallen officers in Dallas:

While we appreciate the president’s proclamation to have our flag flown at half-mast in honor of our fallen police heroes, I respectfully request that he demonstrate his full respect for their ultimate sacrifice by illuminating the White House in blue. Actions speak louder than scripted words, and the honorable act of displaying law enforcement’s ‘This Blue Line’ at the White House would demonstrate the president’s sincere commitment to our fallen heroes and their families.

The White House did not respond to The Daily Signal’s inquiry as to whether it would honor the request or is considering the blue lights.

Obama’s remarks at the memorial service in Dallas were his most extensive so far.

Speaking Friday from Poland, Obama condemned the police shootings of black men in Baton Rouge, Louisiana, and in Minneapolis that preceded the deadly attack Thursday on Dallas police officers, saying:

What I can say is that all of us as Americans should be troubled by these shootings because these are not isolated incidents. They’re symptomatic of a broader set of racial disparities that exist in our criminal justice system.

Hosko, who was assistant director of the FBI’s Criminal Investigative Division from 2012 through 2014, said he agrees with recommendations from the White House policing task force, including body cameras, more neighborhood-based policing, and better training.

However, he said, too many departments don’t have enough resources.

Hosko and other critics with law enforcement backgrounds say Obama has unfairly criticized police before knowing the facts, beginning with a police officer’s arrest of a Harvard professor that led to a “beer summit” at the White House and continuing with the president’s commentary regarding the deaths of black men after altercations with police in Ferguson, Missouri, and in New York and Baltimore.

However, PolitiFact recently called it “mostly false” to characterize Obama as anti-cop, publishing numerous pro-police statements by the president. Among them was this 2015 remark:

“As president, I am committed to making sure America’s dedicated police officers receive the support and recognition they have earned, and to doing all I can to protect those who protect us.”

Vice President Joe Biden told CNN on Monday that Obama “in fact has, repeatedly, been supportive of the police organizations. He talked about it.”

In 2009, Obama said during a White House news conference that Sgt. James Crowley of the police department in Cambridge, Massachusetts, “acted stupidly” in confronting Henry Louis Gates Jr. as the Harvard professor was entering his house. Crowley arrested Gates for disorderly conduct, a charge that later was dropped.

“There’s a long history in this country of African-Americans being stopped disproportionately by the police,” Obama also said at the time. “It’s a sign of how race remains a factor in this society.”

The Cambridge police union accused Obama of a rush to judgment. The president tried to smooth over the matter by bringing together Crowley and Gates for a beer with himself and Biden.

“How he responded to that right off the bat showed his view of law enforcement was decidedly skeptical,” Scott Erickson, president of Americans in Support of Law Enforcement, told The Daily Signal in a phone interview.

“He has been one of many pieces that has helped create an anti-police narrative,” said Erickson, who served as a police officer for 18 years in California, adding:

How he responds is disproportionate because he is the president and it impacts what we see as acceptable. What he should do and should have done is show a shared sense of empathy. Shared empathy will make a person less prone to jump to conclusions.

During a December 2012 interview with BET, the month after he won a second term, Obama said:

Five days following the Ferguson incident in 2014, when officer Darren Wilson shot and killed 18-year-old Michael Brown after he grabbed at the officer’s firearm, Obama said from Martha’s Vineyard: “There is never an excuse for violence against police or for those who would use this tragedy as a cover for vandalism or looting. There’s also no excuse for police to use excessive force against peaceful protests or to throw protesters in jail for lawfully exercising their First Amendment rights.”

The Obama administration’s Justice Department launched an investigation of the Ferguson Police Department and settled a federal lawsuit with the agency in March.

After drug dealer Freddie Gray, who was black, died last year while in the custody of Baltimore police, Obama criticized both police and voters. He went on to say: “I can’t federalize every police force in the country and force them to retrain, but what I can do is to start working with them collaboratively so that they can begin this process of change themselves.”

In the incidents last week before the Dallas attack, an officer fatally shot Philando Castile during a traffic stop in Minneapolis and officers fatally shot Alton Sterling after forcing him to the floor of a parking garage.

The latest police shootings of black men prompted protests around the country, many organized by Black Lives Matter, including the one Dallas. Near the end of that protest, authorities say, Micah Xavier Johnson shot 12 police officers, killing five.

“Insisting we do more to root out racial bias is not an attack on cops, but an effort to live up to our highest ideas,” Obama said Tuesday in Dallas, adding:

Even those who dislike the phrase Black Lives Matter surely we should be able to hear the pain of Alton Sterling’s family … so that yes, insist that his life matters, just as we should understand the students and coworkers who showed their affection for Philando Castile.

‘We Need to Fight’

Another liberal group, MoveOn.org, criticized conservatives who questioned the president or Black Lives Matter in their treatment of the issue of police shootings.

“The last thing we need is more violent and hate-baiting rhetoric like what we’re seeing from former Congressman Joe Walsh and right-wing pundits,” Anna Galland, the group’s executive director of civic action, said in a statement.

We don’t need fear-mongering calls for more guns or more militarized policing. We don’t need a further crackdown on peaceful, lawful protesters or to cast blame at peaceful movements that are confronting police violence. We need to protect civil liberties and fight for the civil rights of black people and all Americans, while keeping our neighbors and communities safe.

Fox News quoted William Johnson, executive director of the National Association of Police Organizations, as faulting Obama and his administration for their “refusal to condemn movements like Black Lives Matter.” The police group endorsed Obama in 2008.

Johnson said such movements were “actively calling for the death of police officers, that type of thing, all the while blaming police for the problems in this country,” and such rhetoric “has led directly to the climate that has made Dallas possible.”

“It’s a war on cops,” he said. “And the Obama administration is the Neville Chamberlain of this war.”