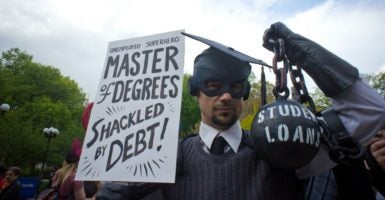 Proposed regulations could disproportionately penalize innovative or “nontraditional” institutions and drive up the costs of higher education. (Photo: Richard B. Levine/Newscom)

A new regulation issued by the Obama administration could impose yet another cost on higher education, with no real benefits.

The proposed rule, published last month in the Federal Register, is very long and includes a number of troubling provisions.  Overall, the rule is intended to expand upon “borrower defense”—a provision that insulates students from having to repay their federal loans under certain conditions—included in federal law in ways that provide, as one commentator at Forbes noted, “faux accountability.”

First, the law seeks to amend 34 C.F.R. § 668.171 by defining an institution of higher education as “financially irresponsible” if it is subject to a lawsuit by a state, federal, or other oversight entity for $750,000 or 10 percent of the institution’s current assets, unless the institution provides financial protection, such as a letter of credit.

This could encourage plaintiffs’ lawyers to sue colleges frivolously, and seek quick settlements, driving up costs for schools while providing no improvements.

Second, the proposed rule seeks to bar arbitration clauses and class-action waivers in contracts with institutions that relate to federal direct loans. There are huge benefits to consumers provided by these contract terms, even though the Obama administration has sought to limit them for other, political reasons.

Research has shown that increased access to federal subsidies already encourages colleges and universities to raise their tuitions.

Yet, instead of protecting students, the proposed regulations could disproportionately penalize innovative or “nontraditional” institutions and drive up the costs of higher education.

Since 2010, the federal government has directly owned student loans through federal programs, rather than guaranteeing private loans. As a result, the federal government has the duty and the constitutional authority to assure that the loans are spent well (assuming federal loan programs are constitutional on an original understanding of Congress’s Article 1 enumerated power to regulate commerce).

In other words, the Department of Education does have a “consumer protection” function if it is in the business of backing student loans. Loans should not be authorized if institutional recipients are embezzling money, defrauding students, and so forth. Similarly, federal law specifically authorizes the government to “forgive” loans in certain circumstances.

The federal government forgives loans through its “Borrower Defense” program, which is intended to be a rather narrow door: Under a specific set of circumstances, you can apply to the federal government and explain that the school you attended defrauded you in some way.

Additionally, loan forgiveness programs in general are bad policy, leaving taxpayers on the hook for the unpaid balance. Loan forgiveness feeds the college cost problem and instead of putting downward pressure on prices, further encourages colleges and universities to raise their tuition, knowing that students will not immediately, or ever, feel the impact of that increase.

Research has shown that increased access to federal subsidies already encourages colleges and universities to raise their tuitions. This problem will only be exacerbated with an increase in loan forgiveness—we are a long way from college being $9,438 dollars per year, as it was in 1980.

Current policies discourage students from pursuing private loan options. As a result, the federal government now controls 93 percent of all student loans, placing taxpayers on the hook for defaults.

Instead of imposing new, pointless costs on higher education, the focus should be on a return to the private student loan market. A restoration of private lending in higher education would limit the risk to taxpayers and take into account important factors such as a student’s ability to repay. That fiscal discipline would help place limits on student debt, and it would also help keep the price of college in check for everyone.