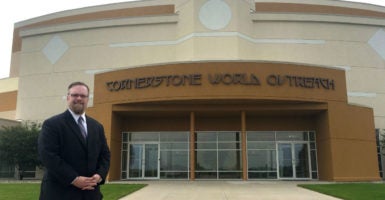 Cary Gordon, senior pastor of Cornerstone World Outreach in Sioux City, Iowa, says he has a constitutional right to teach from the Bible without the state government controlling what he can and cannot say. (Photo: First Liberty Institute)

Iowa’s human rights agency, in a “clarification,” says it will not muzzle churches that teach on matters of biblical sexuality, nor force them to open single-sex restrooms to members of the opposite sex.

The Iowa Civil Rights Commission said it has revised its brochure on “Sexual Orientation & Gender Identity” to state that churches generally are exempt from certain provisions of the state’s civil rights law.

“The revision replaces the previous version which had not been updated since 2008 and clarifies that religious activities by a church are exempt from the Iowa Civil Rights Act,” the commission said in a press release announcing its July 8 decision.

Cary Gordon, senior pastor at Cornerstone World Outreach in Sioux City, Iowa, told The Daily Signal for an article published July 6 that he “would hate to see a day” when the state arrests a pastor for doing his biblical duty.

“The Iowa Civil Rights Commission has never considered a complaint against a church or other place of worship on this issue,” Kristin H. Johnson, the commission’s director, said in a prepared statement. Johnson added:

The Iowa Civil Rights Commission has not done anything to suggest it would be enforcing these laws against ministers in the pulpit, and there has been no new publication or statement from the [commission] raising the issue. The commission regrets the confusion caused by the previous publication.

In 2007, long before the current uproar over Americans using restrooms based on their gender identity, Iowa expanded its civil rights law to include sexual orientation and gender identity as protected classes.

The Iowa Civil Rights Commission published a brochure explaining its interpretation of the law for places of public accommodation such as hotels and restaurants. It said churches generally are not exempt, according to legal organization First Liberty Institute, which represents Gordon’s church.

“The First Amendment was written to protect the rights of churches to teach and live out their faith without fear of government intrusion,” Kelly Shackelford, president and CEO of First Liberty Institute, said in an article on First Liberty’s website.

“The First Amendment was written to protect the rights of churches to teach and live out their faith without fear of government intrusion.” —@_KShackelford

Shackelford’s organization sent a “demand letter” July 5 on behalf of Cornerstone World Outreach, Gordon’s 900-member church, requesting “retraction of all prior statements regarding the ability of the state to interfere with churches’ doctrine and operation, and that it grant full exemption to the church.”

Another legal group, Alliance Defending Freedom, filed a federal lawsuit July 4 on behalf of Fort Des Moines Church of Christ in Des Moines, Iowa, regarding the constitutionality of Iowa’s law as applied to churches.

“We’re taking the state at its word that it will not encroach on the church in any way,” Chelsey Youman, counsel and chief of staff for First Liberty Institute, said in a written statement.

Gordon, in a press release from First Liberty, said he accepts the commission’s apology, but with “clear reservations.”

“We will continue to monitor their activities and stand ready to defend all churches at any time,” the pastor said.