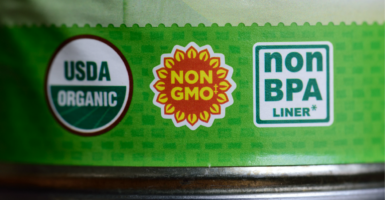 Federal legislation that requires the labeling of genetically engineered food is making its way through Congress. This new law runs counter to science, free speech, and could harm agricultural production as well as American consumers.

Last week, the Senate passed a federal mandatory GMO labeling bill. Now the House is expected to consider and pass this bill by the end of the week, disregarding its own bill that it passed last year and ignoring the specific GMO labeling solution and regulatory principles that were outlined in a recent House Republican leadership report on regulatory reform.

The House, to its credit, passed a flawed bill last year, but one in which someone could say with a straight face that it was a compromise: it developed a federal voluntary labeling scheme.

Mandatory labeling is the problem. The policy arguments against mandatory labeling aren’t even really in dispute by many supporters of the Senate federal mandatory labeling bill. They recognize the bill could mislead consumers, is unjustified by the science, and conveys a strong negative connotation to the crops Americans farmers grow and to a critical technology that is of extreme importance to feeding the world.

Why then did senators who recognize the problems with mandatory labeling support the bill? They did so because they are rushing to get anything through so that industry doesn’t have to deal with Vermont’s state labeling law.

While compliance costs are a concern, they pale in comparison to the problems of mandatory labeling. Congress shouldn’t be passing laws that most legislators recognize is misleading, inappropriately compels speech, and could be devastating to agriculture and biotechnology. Yet, the Senate did just that.

This issue is simply too important to push through a bill that was developed behind closed doors. Once the federal government imposes mandatory GMO labeling, there’s no going back. Now the House may rubber-stamp the Senate bill, shoving it through this week without any proper deliberation.

As the House considers this Senate’s legislation—which it shouldn’t be doing in the first place—it should bear in mind that the House leadership’s regulatory reform report that is part of its policy project titled “A Better Way” expressly identifies the House GMO bill as the solution to the mandatory labeling fight. Here’s a key passage from the report:

Agricultural biotechnology is one of the important tools available to producers to cope with an increasing world population and increasing production risks in the 21st century. Despite the need for this technology, a vocal minority of citizens are creating doubt in the minds of many consumers and policymakers through misinformation about the safety of genetically engineered inputs. This misinformation is influencing policymakers at the local, state, and federal levels and could threaten our farmers’ ability to feed an ever-growing population and increase the cost of food for consumers.

How in the world could legislators support such a statement in a report and then pass a Senate bill that would undermine agricultural biotechnology exactly as described?

The report also discusses the need for sound science in regulations. Yet, the House would be passing a law requiring regulation running counter to the science. Passing such a mandatory labeling law would seem to severely undermine the House leadership’s regulatory reform plan and the entire “A Better Way” project.

If the House feels compelled to consider the Senate bill, then it needs to have an open and transparent process where amendments are considered. One obvious alternative that the House already supported is voluntary labeling.

As another alternative, Congress could allow Vermont to impose mandatory labeling, but prohibit the state from regulating labeling by out-of-state food manufacturers engaged in interstate commerce (in-state businesses, such as retailers, could still inform consumers about food products coming from outside the state). It would be unfortunate if Vermont hurts its citizens, but it shouldn’t pose undue damage to interstate commerce that would hurt consumers and businesses across the country.

Then there are changes that should be noncontroversial. Congress should clearly put on the record that the bill has nothing do with health and nutrition, and isn’t supported by the science. If the U.S. Department of Agriculture or Food and Drug Administration conclude that there’s a reasonable possibility that mandatory labeling could suggest to consumers that genetic engineering has anything to do with the health or safety of the food, mandatory labeling should be prohibited. After all, any law that misleads consumers is clearly inappropriate.

Ultimately, the House should take a step back to avoid rushing legislation. If anything is passed, it should in no way create the misimpression that the federal government thinks there’s something wrong with modern agriculture and biotechnology. This issue doesn’t merely affect industry, or even agricultural producers. A poorly designed law has the ability to hurt all Americans for no scientifically justifiable reason.