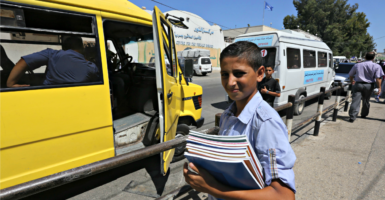 This young man is among Palestinian students returning to U.N.-run schools in the Gaza Strip on Aug. 31, 2015. (Photo: Mohammed Asad/APA Images/Polaris/Newscom)

An elementary school textbook calls the 1948 establishment of Israel a “disaster,” and a high school text tells of the “End of Days” when “Muslims fight the Jews,” among other examples in a report from the Center for Near East Policy, a pro-Israel research institute based in Jerusalem.

“The incitement that we see in these textbooks is shocking,” @RepDLamborn says.

The agency—the United Nations Relief and Works Agency for Palestine Refugees in the Near East, or UNRWA—has come under scrutiny for years for supplying Palestinian schools with textbooks containing violent, anti-Israel references.

The Obama administration, however, defends the textbook program. A State Department spokesman told The Daily Signal that the books are part of “an education that instills respect for and appreciation of universal human rights and dignity of all persons.”

The program serves nearly 500,000 students in about 700 schools in the Palestinian territories, using the Palestinian Authority’s curriculum, according to the State Department.

A U.N. deputy spokesman, Farhan Haq, said in October: “These postings have been removed and the staff have been subject to both remedial and disciplinary action, including suspension and loss of pay.” He did not provide precise numbers.

“After investigating allegations first brought to light by UN Watch, the U.N. recently announced that several [of the agency’s] employees had been suspended for posting inciting social media posts,” Ros-Lehtinen said in a formal statement. She added:

The U.S. can’t continue to send $400 million to UNRWA while ignoring the systemic and endemic anti-Israel, anti-Semitic bias and the blatant incitement to violence we see from its employees. [Its] employees and facilities are consistently tied to foreign terrorist organizations and a full accounting of the agency’s affiliations should be required before another dime is spent on this divisive organization.

President Barack Obama’s administration contends that because of U.S. and U.N. pressure, fewer violent references appear in the textbooks, but admits more progress is needed.

Some in Congress say the textbooks continue to promote violence. A leading senator asked for an investigation by the Government Accountability Office, the internal government watchdog that evaluates how tax dollars are spent. The United States is the largest donor to the U.N. program, contributing $390 million in 2015, down slightly from the previous year. GAO reports in 2003 and 2009 asserted “weaknesses” in the program, but said it complied with State Department guidelines.

The agency made $1.1 billion in expenditures in 2013; the European Union, Britain, Sweden, Norway, Germany, the Netherlands, and Japan also make significant contributions.

The GAO probe comes at the request of Sen. Jim Risch, R-Idaho, chairman of the Senate Foreign Relations subcommittee on Near East, South Asia, Central Asia, and Counterterrorism.

“This is a matter with which I am deeply concerned and I have asked GAO to investigate,” Risch told The Daily Signal in a written statement. “I anticipate that the investigation will take some time, however, so I will reserve my comments until after I receive and am able to assess GAO’s findings on the matter.”

GAO spokesman Chuck Young told The Daily Signal in an email that he didn’t know the timeline for completing the review of the Palestinian textbooks.

The ultimate goal is to withhold funding from the U.N. agency until it requires significant changes to the textbooks, said Rep. Doug Lamborn, R-Colo.

“The incitement that we see in these textbooks is shocking. It’s an outrage and it shows that UNRWA has drifted a long way from its mandate of being a human rights aid organization,” Lamborn told The Daily Signal in a phone interview. “They now have a political agenda. That’s not serving the cause of peace. In fact, it’s prolonging the conflict and violence.”

The State Department has advocated that the U.N. agency teach Palestinian students about tolerance and human rights, a spokesman said.

“We have long supported UNRWA for its critical and life-saving humanitarian work in places like Syria and Gaza,” State Department spokesman Julia Mason told The Daily Signal in an email, adding of the agency:

UNRWA also plays an important role as a stabilizing force and counterweight to extremism in the region. … We are committed to ensuring that Palestinian refugee students receive an education that instills respect for and appreciation of universal human rights and dignity of all persons. The U.N. program’s official mandate is to “provide relief, human development, and protection services to Palestine refugees and persons displaced by the 1967 hostilities [the Arab-Israeli War, also known as the Six-Day War] in its fields of operation: Jordan, Lebanon, the Syrian Arab Republic, the West Bank, and the Gaza Strip.”

The agency has 30,000 employees, mostly Palestinian refugees and some international staff, with headquarters in both Gaza and Amman, and five field offices in Gaza, Lebanon, Syria, Jordan, and the West Bank.

The U.N. agency “is more a part of the problem than the solution,” said Jim Phillips, senior research fellow for Middle Eastern affairs at The Heritage Foundation. He said the program has “promoted victimhood” among Palestinians for generations.

In 2015, the program established dedicated units responsible for reviewing and improving the textbooks.

Chris Gunness, spokesman for the United Nations Relief and Works Agency for Palestine Refugees in the Near East, said of the textbooks in an email to The Daily Signal:

These have been subjected to close examination, including in studies commissioned by the U.S. Department of State, and found to be largely free of incitement. Moreover, UNRWA has in place a system of checks and balances to ensure that no incitement is taught in our classrooms. UNRWA has also put in place a systemwide Human Rights, Conflict Resolution, and Tolerance Education system in all 700 schools we administer, which integrates the concepts of human rights, tolerance, and nonviolent conflict resolution into the curriculum.

The U.N. agency has come under scrutiny on other fronts as caches of weapons, such as rockets, were found stored in its schools and medical clinics over the past several years.

Gunness, the agency’s spokesman, made a speech at Interpal, a British-based charity that has been known to fund the terrorist group, Hamas, The Washington Free Beacon reported in October. Since the 1967 war, Israel—which defeated the forces of Egypt, Jordan, and Syria—has expanded to the West Bank, Gaza, the Golan Heights, and the Sinai Peninsula. Hostilities have continued in the region, including terrorist attacks by Palestinians.

In May, the Intermountain Christian News Service published a White House response to a question from correspondent Anthony Harper about the Palestinian textbooks.

In its statement to Harper, the White House said:

A senior administration official confirmed this statement, but had nothing to add when reached by The Daily Signal.

Harper told The Daily Signal in an email that he also asked Risch, one of his state’s U.S. senators, to call for the GAO probe.

Lamborn, the Colorado congressman, said he believes the White House is “whitewashing” the U.N. agency. He told The Daily Signal:

I don’t see any progress myself. Even if there have been tiny baby steps of progress, UNRWA is still far away from where they need to be. Too many people in Congress defer to the White House and the State Department. As long as the State Department and the White House are not exerting any leadership, they are continuing to maintain the status quo.

The Center for Near East Policy acquired 240 new U.N.-funded textbooks for Palestinian schools, and in January presented the findings of its study to the U.S. Embassy in Israel.

The study concludes that the books promoted incitement to war, and have gotten worse. It says the focus of the textbooks published in 2014 and 2015 are about “delegitimization of both Israel and of the Jews’ very presence in the country.”