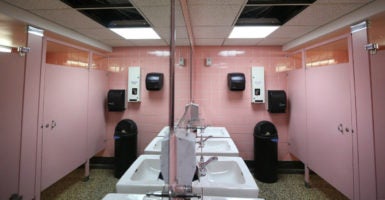 The safety of bathrooms and other intimate facilities must be protected from predators seeking any vulnerability to commit heinous criminal acts.(Photo: Vince Talotta/ZUMA Press/Newscom)

Because I’m passionate about our country, I dedicated years of my life to government service. Later, that same passion led me to focus on raising my three young children to become the finest citizens they can be, becoming a stay-at-home mom.

Nevertheless, I have jumped back into the world of politics and policy far earlier than I expected to because President Barack Obama’s school bathroom mandate is endangering the safety, security, and privacy of my children and yours.

Like many Americans, I was shocked to learn the Obama administration had sent a “Dear Colleague” letter to our nation’s schools threatening them with loss of federal funds unless they adopt radical new gender identity policies. The letter twists Title IX—a law banning sex discrimination in education—and opens the door to a myriad of real dangers to women and girls Title IX was meant to help.

I instinctively knew that I needed to speak up to protect those who cannot speak for themselves: our children.

To put it simply, a boy claiming gender confusion must now be allowed in the same shower, bathroom, or locker room with my daughter under the president’s transgender policies.  When I learned that predators could abuse these new policies to hurt children in school lockers, shelters, pool showers, or other vulnerable public places like remote bathrooms in national parks, I realized I had to do something.

I instinctively knew that I needed to speak up to protect those who cannot speak for themselves: our children. As I learned more about the issue, I realized that I also needed to speak up for victims of sexual assault who would be re-traumatized by having biological males undress in front of them, women who may now feel themselves powerless to do anything about it, due to legal concerns and fear of being labeled a bigot.

Not wanting to see any policy that would lead to more victims of sexual violence and trauma, I started calling my federal, state, and local representatives to see where they stood on the issue and to urge them to fight against Obama’s edict.  I even met with my daughter’s vice principal to express concern.

But what I found dismayed me. People were being bullied into silence by the threats from the federal government and LGBT activists. And I was saddened by how few people in the general public really knew what was really going on today in our nation’s schools.

Through conversations with friends and family, the “United We Stand” campaign was born. Our simple effort to educate parents exploded into a national campaign to tell the White House and Obama “No.”

Our message was that this radical agenda of subjective “gender fluidity” and unrestricted shower and bathroom access actually endangers all.

The “United We Stand” campaign coincides with other efforts to combat Obama’s lawless reinterpretation of Title IX.  North Carolina and several other states, led by Texas Attorney General Ken Paxton, have fought back with lawsuits against the administration’s overreach. Groups advocating boycotting Target, which announced in April that “transgender team members and guests … [may] use the restroom or fitting room facility that corresponds with their gender identity,” continue to affect the retailer’s bottom line.  Church activists are seeking to help ensure our First Amendment rights to freedom of speech and freedom of religion aren’t being curtailed so churches would be, for example, free to make their own bathroom policies inside their houses of worship and child care centers.  Parents, concerned citizens, and other defenders of freedom are banding together to ensure the safety, security, and privacy of our children. Kozma with two of her children. (Photo courtesy of Bethany Kozma.)

But we will not stop there.

We will actively engage state and local government lawmakers and officials to inform and persuade them that they shouldn’t give in to the Obama administration’s threats to withhold educational funding from our children. The safety of bathrooms and other intimate facilities must be protected from predators seeking any vulnerability to commit heinous criminal acts.

Some might consider me just a mom, but it’s a title I wear with pride: I believe it’s the most important job I will ever have. But that title also gives me a certain credibility when it comes to protecting children, because I know the dreams and fears that only parents can have for their kids.

As parents, we have the privilege and duty to educate and protect our children so that they can lead our nation on to further greatness when it’s their turn to do so. Until that time, I will boldly stand up to ensure the safety, security, and privacy of my children and yours so that together we all can stand united, safe, and free.