The Noise Behind the New Jobs Report 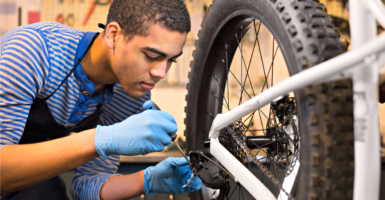 What explains these large gyrations? Probably statistical noise.  Americans shouldn’t read too much into May’s discouraging job numbers or June’s hopeful ones.

Consequently, statistical noise can cause the household and payroll surveys to fluctuate considerably month to month, even if job growth and unemployment do not change. And 10 percent of the time, the surveys will report estimates outside this confidence interval.

This statistical noise appears to explain the recent whiplash. Job growth plunged in May and rebounded in June. However, the average across both months was plus 149,000 jobs—very close to average job growth in March and April (plus 165,000 jobs).

Many measures of labor market health showed this pattern: dropping in May and rebounding in June.

The unemployment figures also show this pattern. The number of unemployed Americans fell 484,000 in May and the unemployment rate dropped 0.3 percentage points, mostly driven by Americans leaving the job market and no longer looking for work.

Unemployment increased by 347,000 workers in June and the unemployment rate increased 0.2 percentage points, mostly driven by Americans returning to the labor force and looking for work.

The Bureau of Labor Statistics’ employment reports are surveys. Like all surveys, they have sampling error. Rather than focusing on monthly movements, Americans should look at the long term trend.

These trends show job growth slowed over the past year, but remain far from recessionary levels.