Ted Cruz’s Fight to Protect the Internet From Authoritarian Regimes 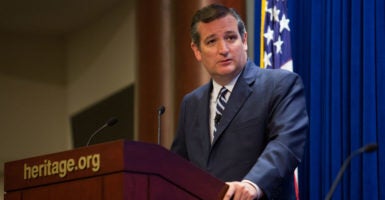 The Obama administration’s decision to give up U.S. control of regulating the internet is likely illegal, Sen. Ted Cruz, R-Texas, said.

“The Obama administration does not have the authorization from Congress,” Cruz said Thursday, speaking at a Heritage Foundation event on internet freedom. “And yet they are endeavoring to give away this valuable, critical property. To give it away with no authorization at all. That ought to trouble all of us.”

We built the internet and America maintains it as free for all. We don’t use it in an imperialist manner to impose our views on others. We maintain it as an oasis of freedom.

Time is running out for Cruz, however, in what he considers his fight to keep the internet free from censorship by less-open foreign countries.

>>> Watch the Event: Concerns About Ending US Contractual Relationship With ICANN

In June, Cruz introduced a bill that would keep the U.S. Commerce Department in an oversight role of the body that assigns internet names and addresses. That body, the Internet Corporation for Assigned Names and Numbers, or ICANN, is a nonprofit organization that gives out domain names and numbers for the internet.

A domain name is the address of a person or an organization online. So when someone types dailysignal.com, he or she is brought to The Daily Signal website and not an imposter. One of ICANN’s responsibilities is to ensure that a specific domain name is not assigned to multiple organizations.

At issue is whether the U.S. should give up its role in overseeing ICANN. Supporters of the move say it is symbolic and that no single government or organization should have that much power over the internet. Cruz and other opponents say the move is too risky and that authoritarian regimes could gain influence over how the internet works.

Since ICANN’s creation in 1998, it has operated under a contract with a Commerce Department entity called the National Telecommunications and Information Administration.

With the department’s advice, ICANN has carried out so-called Internet Assigned Names Authority functions under the zero-cost contract. These functions include assigning domain names. Prior to 1998, one University of California computer scientist carried out these functions.

From the beginning, the United States has planned to transition oversight of ICANN from the Commerce Department to some sort of international body.

The contract between the Commerce Department and ICANN was set to expire in 2015, but the department delayed the move. That transition is now scheduled to begin in September.

Cruz wants to stop that transition altogether. In the event at The Heritage Foundation, he made the case for his bill.

“When it comes to basic principles of freedom, letting people speak online without being censored—that ought to bring everyone together,” he said.

But young people, we’re talking about the ability of the next generation and generations to come to speak your mind without the government giving prior approval.

The Protecting Internet Freedom Act, co-sponsored by Sens. Mike Lee, R-Utah, and James Lankford, R-Okla., would prevent the U.S. from giving up oversight of ICANN unless Congress passes legislation specifically authorizing the transition. A companion bill in the House was introduced by Rep. Sean Duffy, R-Wis.

Brett Schaefer, The Heritage Foundation’s Jay Kingham fellow in international regulatory affairs,  testified on this issue in May before the Senate Committee on Commerce, Science, and Transportation.

Schaefer discussed the uncertainty surrounding the new ICANN structure. Schaefer said the U.S. should retain some oversight until ICANN can prove the new plan will work smoothly. He testified:

To that end, I recommend a ‘soft extension’ of the existing contractual relationship—one that allows ICANN two years to demonstrate that the new procedures it is putting in place actually work to hold the corporation accountable. The transition to a multistakeholder global system is too important to get wrong and too important to rush.

A 2-year-old fact sheet on the ICANN website answers basic questions about the transition.

Supporters of the transition say it is mostly symbolic. The U.S. government needs to cut its ties to ICANN, the Los Angeles Times said in an editorial:

But keeping the Commerce Department’s nominal role in domain names would only encourage other governments to remake the internet to their liking, either through technological barriers or through intergovernmental organizations such as the United Nations. If it truly loves the open internet, Congress will let it go.

Cruz’s bill was referred June 8 to the Senate Committee on Commerce, Science, and Transportation. Unless it or similar legislation passes and is signed by President Obama, the transition will begin Sept. 30.