How We Can Avert the Coming Debt Crisis 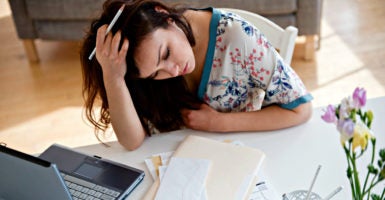 The current grim outlook has serious implications for the sustainability of government budgets over the long run. (Photo: Jamie Grill/Blend Images/Newscom)

Government debt has grown by $13.6 trillion over the past two presidential administrations—from 54 percent of the economy when President George W. Bush took office to 102 percent today in President Barack Obama’s final months.

The Congressional Budget Office estimates that debt will grow by another $9.8 trillion over the next decade, but only if policymakers break their addiction to driving up even more spending in future legislation.

“When the crisis hits, it will come quickly and will be severe,” @paulwinfree writes.

Over the next 35 years, debt held by the public (that is, debt not including borrowed money from the Social Security and Medicare trust funds) could grow from 74 percent to 224 percent of gross domestic product, according to the Government Accountability Office.

Failure to address the growing debt will result in a fiscal and economic crisis. When the crisis hits, it will come quickly and will be severe. Bond prices will fall and interest rates will spike. Debt service payments will skyrocket. And the economy will enter a deep recession.

The initial timing and magnitude of the crisis will be driven by psychological factors. However, the fundamentals of the crisis will eventually win out unless policymakers do something to confront the causal factors driving the underlying unsustainability of this massive debt.

Policymakers across the ideological spectrum make misinformed claims about how their favored positions will change the government’s future financial position.

Some say that taxes levied on the rich will save the government from financial ruin. Others suggest that the fiscal outlook can be improved by cutting down on duplication, ending waste, or even eliminating a federal agency or two. Still, others argue that economic growth spurred by tax cuts or investment spending will improve the fiscal outlook.

But they’re as ill-equipped to improve the long-run sustainability of the federal budget as the mythbusters are to catch Bigfoot.

The next president and Congress should consider that policy choices are relevant to the sustainability of government finances. Not all revenue increases or spending reductions are equal.

And as I show in a new paper, all revenue increases, and almost all spending reductions, will not meaningfully change the long-run fiscal sustainability of the budget.

By analyzing the long-run fiscal trends between spending and revenue, I find that just 2 percent of all spending accounts within the federal government are driving the underlying unsustainability of the budget.

But while the problem is contained, it is significant, as projected spending from those accounts is equivalent to 60 percent of gross spending over the next 10 years, with spending on public health care contributing the largest component to the fiscal imbalance. However, the federal government’s retirement and pension programs also drive a significant portion of the underlying instability.

Furthermore, the U.S. is not an outlier. Other large economies also have unsustainable entitlement programs.

As economist Alberto Alesina noted in a recent interview, referring to the international Organization for Economic Cooperation and Development: “[As for] OECD countries with taxes over GDP ratio in the order of 50 percent, if you don’t stop the growth of social entitlements, we will always be running after a moving target that is always increasing.”

This grim outlook has serious implications for the sustainability of government budgets over the long run. Delay in dealing with the underlying unsustainability severely limits future fiscal choices.

In 2009, Peter Orszag, director of the U.S. Office of Management and Budget, said “the path to fiscal responsibility must run directly through health care.”

He was mostly correct. Reducing health care spending growth is a necessary, but not sufficient, condition to dealing with the federal budget’s underlying unsustainability.

>>> Read the Report: Causes of the Federal Government’s Unsustainable Spending