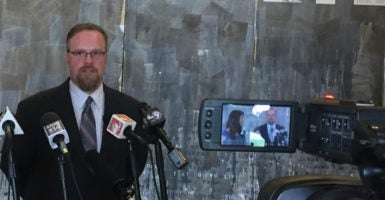 Pastor Cary Gordon at Cornerstone World Outreach in Sioux City, Iowa, wants to be able to teach from the Bible without having the state government control what he can and cannot say. (Photo: First Liberty Institute)

An Iowa pastor, saying the government needs to stop “meddling in religious affairs,” is at odds with the state over a law focused on sexual orientation and gender identity that he says hinders his First Amendment right to teach on matters of sexuality.

“The state of Iowa is not the self-appointed pope of all churches,” Cary Gordon, pastor of Cornerstone World Outreach, a nondenominational church with around 900 members in Sioux City, Iowa, told The Daily Signal. An Iowa Civil Rights Commission brochure on sexual orientation and gender identity says churches are places of public accommodation and generally are not exempt from the law, according to First Liberty Institute, a legal organization that defends religious freedom and represents Gordon’s church.

The brochure says the Iowa Civil Rights Act, Iowa Code Chapter 216, “was expanded to add sexual orientation and gender identity to the list of protected classes.” The change took effect in July 2007.

“It is now illegal in Iowa to discriminate against a person because of his/her sexual orientation or gender identity,” the brochure says.

As it reads, according to their interpretation of the Iowa code, if you discuss anything out of the Scripture that relates to sexuality or marriage … you’re not in compliance with the law and you can be sort of treated like a criminal.

Gordon, senior pastor of his church for over 21 years, said his greatest concern with the issue is the “flagrant disrespect for the First Amendment of the Constitution, where the state retains the power to correct or control what I say and teach out of the Bible.”

“It’s fundamentally wrong and I can’t comply with that,” Gordon added. “I’ve taken an oath to the Lord Jesus Christ, and I obey the Bible above all men. … I have to obey God, and that puts me in a precarious position.”

The state Civil Rights Commission’s brochure “also indicates that the government has the authority to force churches to allow men in women’s restrooms,” First Liberty Institute says in a case summary.

“The Iowa Civil Rights Commission has not made any changes in its interpretation of the law, nor does it intend to ignore the exemption for religious institutions when applicable,” Kristin Johnson, the commission’s executive director, wrote in an email to The Daily Signal. Johnson wrote:

The Iowa Civil Rights Commission enforces Chapter 216 of the Iowa Code, which in part prohibits discrimination by public accommodations. The code also provides for an exemption for ‘Any bona fide religious institution with respect to any qualifications the institution may impose based on religion, sexual orientation, or gender identity when such qualifications are related to a bona fide religious purpose.’ This law was enacted in 2007 and has been consistently enforced, and the exemption consistently applied, since its enactment.

“The state of Iowa is not the self-appointed pope of all churches.” —@Rev_Gordon

“I would hate to see a day when a pastor for doing his duties is arrested or something and taken to jail,” Gordon said, adding:

What we’re facing right now is quite literally a pastor being drug into court and having to spend a lot of church money to defend himself for doing something that pastors have been doing faithfully for hundreds of years and that’s teaching orthodox, Christian doctrine.

“I think this is really important that we stay true to our founding principles,” he said.

A federal lawsuit was filed July 4 on behalf of Fort Des Moines Church of Christ in Des Moines, Iowa, against members of the state Civil Rights Commission over concerns similar to those expressed by Cornerstone World Outreach.

Gordon, the father of three girls and two boys, said the state doesn’t “have any right to tell us what to teach or how to teach it or how to apply our beliefs in real life.”

“The state needs to stay out of our business,” he said.

Over the long term, the pastor said, this issue should affect all Christians:

The Bible teaches us to be modest and it teaches us certain roles that are honorable and beautiful about both sexes, male and female. You have to try to survive in a world that seems more and more hostile to what you believe whether you’re at church or at the shopping center.

Chelsey Youman, chief of staff and counsel for First Liberty Institute, told The Daily Signal it is hoping to avoid litigation.

“We … wanted to give the state commission a chance to do the right thing here,” Youman said.

The Iowa Civil Rights Commission has by 10 a.m. Aug. 5 to respond.

“We think it’s an absolute wake-up call to churches across America that we’re now having a state government say what you can and cannot say about your own doctrinal beliefs within the confines of your church, let alone having to open your facilities up in a way that is against your doctrine,” Youman said.