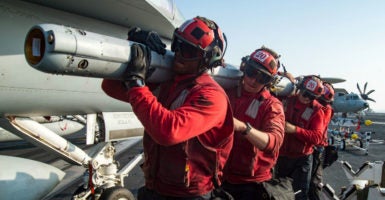 Daniel Briggs is legal counsel and director of military affairs for Alliance Defending Freedom and served on active duty in the Air Force as a JAG officer in Afghanistan, Turkey, and the U.S.

Last week, the Department of Defense ended its recognition of service members’ biology and supplanted it with a radical ideology pushed by the Obama administration. As other commentators pointed out recently (here and here), there is no military justification for this move.

According to a study the Department of Defense commissioned, personnel who consider themselves transgender currently make up anywhere from 1,320 to 6,630 of our 1.3 million-strong force on active duty.

Setting aside doubts about the accuracy of the high end of that range, those service members constitute 0.0010 to 0.0051 of our active duty force. Undeterred by data, facts, or genuine concerns about military readiness and morale, Department of Defense leadership mandated a new policy and did so without even polling service members about it. Never ask a question to which you do not want to know the answer.

The change was announced officially through a Department of Defense Instruction and directive-type memo; more specific guidance will follow. For now, here are five things you need to know about this disastrous policy.

Neither the instruction nor the memo acknowledges the religious freedom, freedom of conscience, or professional discretion of military medical providers. However, the instruction makes it clear that medical providers in the military will be integrally involved in gender transition, from establishing the member’s medical diagnosis to recommending “medically necessary care and treatment” to developing a medical treatment plan, and more.

What about the medical providers who do not provide the diagnosis or treatment a service member seeks? Perhaps their religious beliefs confirm their medical understanding of gender being inextricably linked to biological sex, leading them to conclude that this service member needs help (counseling, therapy) but not affirmation.

Other military medical providers may, for medical reasons alone, determine that some service members are not sufficiently stable in their preferred gender to warrant the surgical intervention they seek. Will these medical providers find themselves in the crosshairs of ideology masquerading as progress?

Using what can best be described as a “Dorothy approach“ (if repeated constantly it becomes true), the Department of Defense is the latest executive agency to declare that discrimination based on gender identity is a form of sex discrimination.

What does that mean for the military medical provider who reaches a conclusion that is not what his or her patient seeks? When a second or third medical opinion supports a different conclusion and medical treatment plan, is the original medical provider now guilty of discrimination? Or will their considered professional judgment be respected?

“In applying the tools prescribed in this issuance, a commander will not accommodate biases against transgender individuals.” These words are found in the policy section of the instruction. They are cause for concern both for what they say and for what they do not say.

What, exactly, are “biases against transgender individuals”? Do chaplains who counsel on the basis of their sincerely held religious beliefs run afoul of this prohibition? What about medical providers who request to be removed from the gender transition decision matrix?

If a female service member requests a reasonable accommodation respecting her privacy interests in not being forced to shower with a male, is she actually expressing a prohibited bias? It’s pretty safe to say which way commanders will feel compelled to lean when in doubt.

4. Standards are now anything but standard.

From which side of the hall to walk on (the right side) to which hand to carry items in (the left hand) to how many pushups to perform—and how to perform them—the military is a unique world where the mission is accomplished only when a disciplined force meets standards. But what good are standards when the underlying sex-based definitions are now fluid?

Not surprisingly, males and females wear differently tailored uniforms and body armor. Physiological differences in strength and endurance lead to different physical fitness standards. But now, a male who identifies as a female—even without transition treatment or surgery—can take the physical fitness test as a female. And a female who tests as a male runs the risk of failing the higher standards.

5. The Department of Defense looked beyond our borders for justification.

Commissioning a RAND Corporation study to support its predetermined conclusion, the Department of Defense instructed RAND to, among other things, “review the experiences of foreign militaries that permit transgender service members to serve openly.”

The first foreign military highlighted is Australia, whose Department of Defense uses commanders’ guides that the advocacy group Defense Lesbian, Gay, Bisexual, Transgender, and Intersex Information Service produced. Under the Australian military’s process, a service member in the gender transition period is medically exempt from meeting physical fitness standards and is nondeployable.

Israel Defense Forces link the assignment of housing, restrooms, and showers to biological sex and do not change that for anyone until after surgical intervention is complete. Of course, the majority of noncombat personnel in Israel live at home, off base, so these issues do not affect the vast majority of Israel’s military culture.

The United Kingdom changed its policy following a European Court of Human Rights ruling (another reason to never cede our legal autonomy to a supranational body) and allows for “some flexibility in physical [fitness] standards,” determined on a case-by-case basis.

RAND summarized its review of foreign militaries by stating it found “no evidence . . . that allowing transgender personnel to serve openly has had any negative effect on operational effectiveness, cohesion, or readiness.”

Really? No evidence at all? Not even a little? Maybe our Department of Defense isn’t the only one adept at asking certain questions to obtain certain answers.

Although the military is in the midst of profound upheaval, our Constitution remains unchanged. Alliance Defending Freedom is therefore standing alongside our service members and working aggressively to defend their freedom to live out their faith while in uniform.