The Explanation Americans Deserve From FBI on Clinton’s Server Use 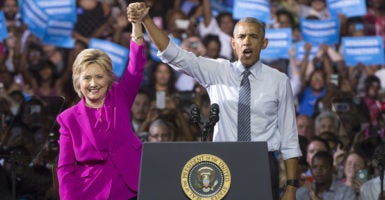 “I am confident that I never sent or received any information that was classified at the time it was sent and received.” That is what former Secretary of State Hillary Clinton told reporters last July.

At least we now know that was not true. In announcing that the FBI would be recommending to the higher-ups at the Department of Justice that no charges be filed against Clinton, Director James Comey stated:

While stating that the bureau’s investigation did not uncover evidence of intentional mishandling of classified information or of disloyalty or an attempt to obstruct justice, Comey’s remarks reflected the FBI’s conclusions that Clinton’s conduct was hardly in keeping with her previous statement that she took “classified information very seriously.”

For example, seven email chains concern matters that were classified at the Top Secret/Special Access Program level when they were sent and received. These chains involved Secretary Clinton both sending emails about those matters and receiving emails from others about the same matters. There is evidence to support a conclusion that any reasonable person in Secretary Clinton’s position, or in the position of those government employees with whom she was corresponding about these matters, should have known that an unclassified system was no place for that conversation. …

None of these emails should have been on any kind of unclassified system, but their presence is especially concerning because all of these emails were housed on unclassified personal servers not even supported by full-time security staff, like those found at Departments and Agencies of the U.S. Government—or even with a commercial service like Gmail.

Just how careless was Clinton in the handling of our nation’s secrets (and those of our allies to which she was privy)?

While Comey stated that the FBI did not uncover direct evidence that Clinton’s personal accounts were successfully hacked by hostile actors, he was quick to add that “given the nature of the system and of the actors potentially involved, … we would be unlikely to see such direct evidence” and that the FBI did uncover evidence “that hostile actors gained access to the private commercial email accounts of people with whom Secretary Clinton was in regular contact from her personal account.”

Moreover, the FBI found that Clinton “also used her personal email extensively while outside the United States, including sending and receiving work-related emails in the territory of sophisticated adversaries.”

Comey added, “Given that combination of factors, we assess it is possible that hostile actors gained access to Secretary Clinton’s personal email account.”

However, the facts, as outlined by Comey, could possibly support a charge under 18 U.S.C. § 793, which, among other things, makes it a federal crime, punishable by up to 10 years’ imprisonment, for an official who has been entrusted with classified information relating to the national defense to “permit … the same to be removed from its proper place of custody or delivered to anyone in violation of his trust, or to be lost, stolen, abstracted, or destroyed” through the exercise of gross negligence.

By Clinton’s own account, she used personal emails as a matter of “convenience;” on the issue of whether that was grossly negligent or not, Comey was strangely silent.

By Clinton’s own account, she used personal emails as a matter of “convenience;” on the issue of whether that was grossly negligent or not, Comey was strangely silent.

This appears to end the matter, at least so far as the ongoing criminal investigation is concerned. Since the matter will likely not be decided in a court of law, it will now be up to the court of public opinion.

As a preface to his remarks, Comey stated, “I am going to include more detail about our process than I ordinarily would, because I think the American people deserve those details in a case of intense public interest.” A laudable sentiment, to be sure, but one which fell a bit short on its promise. Regardless of the outcome, the public deserved an explanation as to whether the FBI considered charging Clinton with gross negligence in the handling of classified information, and if not, why not.