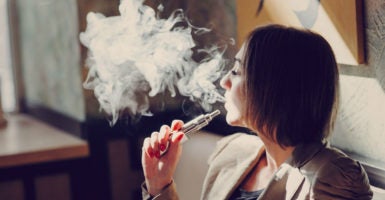 When it comes to reducing disease and death by regulating based on the continuum of risk, the federal government has it exactly backward. (Photo: iStock Photos)

Elaine Keller served as president of The Consumer Advocates for Smoke-free Alternatives Association from 2011-2014.

On May 5, the U.S. Food and Drug Administration finalized a rule known as the Deeming Regulation, extending its authority under the Family Smoking Prevention and Tobacco Control Act, or Tobacco Act, to all tobacco products, including electronic cigarettes (e-cigarettes), also known as vapor products.

Some scientific journals refer to these products as electronic nicotine delivery systems.

A June 16 consumer update states that the FDA’s goal is to protect Americans from tobacco-related disease and death. Some of the steps being taken include restricting sales to minors, requiring health warnings, and making manufacturers show that the products “meet the applicable public health standard set by the law.”

1. Help Consumers Better Understand the Risks of Using These Products

The United Kingdom’s Royal College of Physicians has said that e-cigarettes can prevent almost all the harm from smoking. Its report states, “The available data suggest that they are unlikely to exceed 5 percent of those associated with smoked tobacco products, and may well be substantially lower than this figure.”

The Deeming Regulation definitely will not help consumers understand this, because the Tobacco Act prohibits companies from making “false and misleading product claims.” The law categorically assumes all claims about safety are false, no matter how true they might be.

Likewise, even though millions of former smokers have reported that vapor products made it possible for them to switch away from smoking to the practice of vaping, vendors must not make “smoking cessation” claims.

Vapor products will be required to display the following statement on labels: “WARNING: This product contains nicotine. Nicotine is an addictive chemical.”

There is some controversy in scientific circles regarding whether nicotine per se is addictive. The Royal College of Physicians’ 2000 report on nicotine addiction states that “it is reasonable to conclude that nicotine delivered through tobacco smoke should be regarded as an addictive drug,” but it may be that additional chemicals found in smoke work to create the attraction.

Products that deliver only nicotine such as the nicotine patch or gum have not proven to be addictive when given to nonsmokers.

If the manufacturer submits a self-certification statement to FDA that the newly regulated product does not contain nicotine (and that the manufacturer has data to support this assertion), then an alternate statement must be used on product packages and advertisements: “This product is made from tobacco.”

Vapor products contain no tobacco. Some liquids contain a pharmaceutical grade chemical (nicotine), which has been extracted from tobacco, but doesn’t make them “made from tobacco” any more than an aspirin tablet is made from willow bark.

But more to the point, this is the label prescribed for products that do not contain nicotine. Therefore, the product would contain nothing whatsoever that could possibly be mistaken for being “made from tobacco.” The government is requiring companies to display false statements about their products.

2. Protect Young People From the Risk of Addiction

By the time the rule went into effect, 48 of the 50 states already restricted sales of vapor products to persons under age 18, and in two cases to persons under age 21. Thus, in terms of protecting youth from possible exposure to vapor products, the new federal rule is a bit superfluous. But more importantly, if a person doesn’t use a substance, it is impossible to become addicted to it.

The Monitoring the Future survey found that the majority of nonsmoking youth who experiment with e-cigarettes opt for flavored liquids that contain no nicotine. Regular use of e-cigarettes among youth, as in adults, is almost entirely concentrated in those who already smoke, and most are using the products with a goal of quitting smoking.

But even if nonsmoking youth use vapor products that do contain nicotine, what is the risk of becoming addicted?  In “Nicotine Without Smoke,” the Royal College of Physicians stated that “there is no evidence thus far that e-cigarette use has resulted, to any appreciable extent, in the initiation of smoking in either adults or children,” and that “even if such gateway progression does occur, it is likely to be inconsequential in population terms.”

Lynn T. Kozlowski is a professor of health behavior at the University at Buffalo, the State University of New York. He has pointed out, “The focus on minor gateway effects for youth should not distract from the need to explore policy and clinical questions about harm and disease risk from adult use of legal tobacco products.”

The usual framework for regulation of any product involves specifying requirements for the product to meet and banning products that fail to meet the standards. The Tobacco Act took a different approach. Instead, products that had been commercially marketed in the United States as of Feb. 15, 2007 (referred to as the “predicate date” or “grandfather date”), were permitted to remain on the market. For tobacco companies, that covered a lot of ground since there were thousands of conventional cigarettes on the market before the predicate date.

As of Feb. 15, 2007, there were no vapor products—no electronic cigarettes or electronic nicotine delivery systems—that had been commercially marketed in the United States. Therefore, all vapor products will be required to undergo an extensive and expensive pre-market approval process. (See “Premarket Tobacco Product Applications for Electronic Nicotine Delivery Systems Guidance for Industry.”)

In addition to extensive toxicology testing of both liquids and vapor, companies must conduct full investigations of health risks and describe how their product compares to other products “legally on the market (i.e., either grandfathered or with a marketing authorization in effect).”

Studies must also be conducted to show that the new product will be appropriate for the protection of public health both of users and non-users, considering both the risks of the product and the likelihood of changes in initiation or cessation rates. To date, there are no vapor products that meet the FDA’s description of “legally on the market” and a crystal ball will be required to guesstimate an individual product’s effects on initiation or cessation rates.

Each variation of a product, such as nicotine strength or flavors, requires a separate application, which the FDA refers to as a “PMTA.” So, for example, a company that sells only one model of e-cigarette with a choice of four nicotine strengths and six flavors would need to submit 24 PMTAs. The FDA has estimated the cost of preparing the applications at $330,000 each, although this estimate is considered extremely conservative by some stakeholders. It should be noted that regardless of how much time or money a company has spent preparing and submitting applications for its products, the FDA may, at its discretion, decide to disallow the marketing of those products.

Left unregulated, vapor products were doing a wonderful job of protecting consumers. After remaining fairly level for a number of years, smoking rates began to drop when e-cigarettes came onto the market. By 2015, the Centers for Disease Control and Prevention announced, nearly one in four (22 percent) recent former cigarette smokers (quit within the past year) were using e-cigarettes. The CDC also mentioned that current cigarette smokers who had tried to quit in the past year were more likely to use e-cigarettes than those who had not tried to quit.

The deeming regulation of vapor products will have a chilling effect on this trend. The expense of submitting pre-marketing applications for every variation of a product will drive most, if not all, small companies out of business. Small companies cannot afford to risk millions of dollars to find out whether the FDA will approve their existing products for sale. Consequently, the number and variety of products available to be used as a substitute for smoking will shrink dramatically. Increased federal, state, and local requirements will undoubtedly increase the price of smoking substitutes, thus it is very likely fewer smokers will switch. Some smokers that had switched to electronic cigarettes may switch back to smoking conventional cigarettes, because the FDA will have made it cheaper to smoke than to vape.

5. Comprehensively Regulate Products That Contain Nicotine, Based on the “Continuum of Risk”

In 2013, Mitch Zeller, director of the FDA’s Center for Tobacco Products, wrote: “There is a spectrum or continuum of tobacco and medicinal products that aim to do the same thing—deliver nicotine to the user. But the toxicity associated with those products varies dramatically. At one end of the spectrum is the conventional cigarette…”

Smoking causes numerous diseases—including heart attacks, strokes, lung diseases, and several forms of cancer. These diseases are not caused by the nicotine itself, but by other elements in smoke—including tar, carbon monoxide, and toxic chemicals. Since smoke creates the risk of disease, any product that can deliver nicotine without smoke may lower the risk of disease and death. These products may include smokeless tobacco, vapor products, and “nicotine replacement” products such as the patch, gum, lozenges, and inhalers.

Zeller also wrote, “Anyone who would ponder the endgame must acknowledge that the continuum of risk exists and pursue strategies that are designed to drive consumers from the most deadly and dangerous to the least harmful forms of nicotine delivery.”

The Tobacco Act that went into effect in 2009 regulates the most hazardous source of nicotine—conventional cigarette products—with a very light touch. Any new conventional cigarette must undergo the pre-market approval process, but the thousands of products that were already on the market by the predicate date may remain on the market with no pre-approval requirements. No toxicology testing of tobacco or smoke, no clinical trials, no comparison to other products.

In contrast, vapor products that have been on the market for up to eight years must stop being sold within the next two to three years if they have not received FDA pre-market approval.

Even if the predicate date were moved forward to remove the ex post facto effect on currently available products, current products will not be able to be improved without significant investment in attempting to prove scientifically that the change will not harm public health. If a component becomes unavailable, making a substitution would require an entire PMTA. Furthermore, FDA researchers at Georgia State University’s Tobacco Center of Regulatory Science have found, “ENDS [electronic nicotine delivery systems] need to improve as a satisfying alternative or the attractiveness and appeal of the regular cigarette must be degraded to increase the potential of ENDS replacing regular cigarettes.”

The bottom line? When it comes to reducing disease and death by regulating based on the continuum of risk, the federal government has it exactly backwards.