As Congress Returns, Democrats and Republicans Clash Over Gun Control 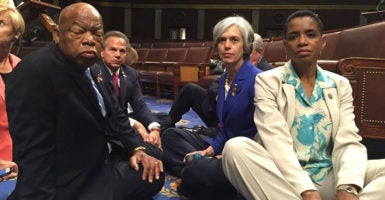 House Republican leaders are planning to hold a vote this week on legislation intended to bar some suspected terrorism suspects from buying guns.

The bill, whose language is backed by the National Rifle Association, is part of an “anti-terrorism” legislative package the House is considering in response to the terrorist attack June 12 at a nightclub in Orlando, Florida.

While Republicans have been reluctant to pursue any legislation that can be construed as gun control, backers of this proposal insist it achieves the delicate balance of preventing those suspected of having terrorist ties from buying weapons—while preserving their right to due process.

“I have not met a single member of Congress who is in favor of terrorists being able to buy guns or explosives,” said Rep. Lee Zeldin, R-N.Y., one of the sponsors of the gun measure.

“Unfortunately, Democrats have tried to make it out to be an issue where just one political party is in favor of terrorists not being able to purchase guns or explosives, and that’s absurd,” Zeldin told The Daily Signal in a phone interview on Friday.

After the Orlando massacre, House Democrats staged a sit-in of more than 24 hours demanding action on gun control.

Still, based on early reaction, it appears Democrats won’t support the Republican-backed proposal because of concerns that the “probable cause” standard required by the bill is too difficult to achieve.

“Republicans are again putting the NRA ahead of their responsibility to keep the American people safe,” House Minority Leader Nancy Pelosi, D-Calif., said of the Republican proposal in a statement.

One gun-rights group, Gun Owners of America, described the GOP’s move as a “cave-in.”

The Republican measure, which is based on the language of Zeldin’s Protect America Act, would permit the Department of Justice to deny a gun purchase to someone who is being investigated as a known or suspected terrorist, or has been investigated in the last five years.

“I have not met a single member of Congress who is in favor of terrorists being able to buy guns or explosives,” said @RepLeeZeldin.

Law enforcement, however, would have to obtain a court order to prevent a terrorist suspect from buying a gun, and the government would have three business days to prove it has enough evidence of terrorist activity to block the sale.

The suspect is also granted an automatic right to a hearing, and to an attorney.

Democrats believe the three-day window is too short to prove probable cause, arguing the legislation will have little functional impact.

Zeldin counters that the government should have to face a high standard of proof considering the government’s terrorist watch lists are controversial. Individuals do not have to be charged with a crime to be placed on the lists, and many don’t know they are on them.

“The Department of Justice already knows who these individuals are and already has evidence collected, so the burden should be on the government to demonstrate probable cause that an individual is a terrorist instead of making an American demonstrate that they’re not a terrorist,” Zeldin said. “That’s the way it has always been in our country and the way it should be.”

Democrats prefer a bill first introduced in the Senate that would bar guns from being sold to suspected terrorists who are on the FBI’s “no-fly” and “selectee” lists.

The House has its own companion version of that bipartisan bill. Under those bills, someone on the no-fly and selectee lists who is blocked from buying a gun can appeal that decision. A court has 14 days to decide on the appeal.

The NRA opposes those bills.

Democrats are framing Republican leadership’s decision to bypass a vote on that bill in favor of Zeldin’s legislation as the GOP bowing to the NRA. Zeldin tried to downplay the NRA’s support of his proposal.

“This isn’t the NRA bill,” Zeldin said. “Members of Congress wrote this bill, not the NRA. I don’t think members should make their determination as to whether or not to vote for or against the bill based on any outside groups support or opposition. It should simply be based on the merit of the proposal and the reality it keeps us safe.”