FBI Flagged This Congressman as a Terrorist. Here’s Why He Opposes a New Gun Ban. 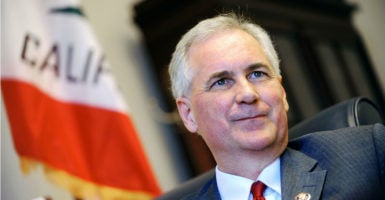 “If your fundamental constitutional rights can be withdrawn at a bureaucrat’s whim” without due process, Rep. Tom McClintock, R-Calif., argues, “then the Bill of Rights means nothing.” (Photo: Olivier Douliery/MCT/Newscom)

Waiting on a routine flight from Sacramento back to Santa Barbara, Rep. Tom McClintock, R-Calif., discovered he was a terrorist. Or at least that’s what the FBI thought.

McClintock was clearly more of a frequent flyer than radical extremist. But a classic case of mistaken identity, not ties to terrorism, landed him on the FBI’s no-fly list.

A well-known state senator at the time, McClintock was left stranded at the Sacramento International Airport about 10 years ago. He couldn’t fly home under his own name.

Pointing to gaffes like the one that grounded McClintock a decade ago, Republicans now warn of serious constitutional consequences that could occur if Democrats ban suspects on the no-fly list from purchasing guns.

“If your fundamental constitutional rights can be withdrawn at a bureaucrat’s whim” without due process, McClintock argues, “then the Bill of Rights means nothing.”

After an Islamist-inspired gunman murdered 49 people at a nightclub in Orlando, Democrats launched an effort to close what they characterize as “the terrorist loophole.” They want to block suspected terrorists on the no-fly list from buying guns—legal purchases that President Barack Obama describes as “insane.”

“Congress has become complicit in these murders by its total, unconscionable, deafening silence,” Sen. Chris Murphy, D-Conn., said after a filibuster topping 14 hours. “This doesn’t have to happen, but this epidemic will continue without end if Congress continues to sit on its hands.”

Branding their legislation as the “no fly, no buy” bill, Democrats have already held multiple press conferences, filibustered the Senate, and hijacked the House floor. That effort has quickly raised questions about the little understood no-fly list, which is not public information. After 9/11, the FBI became responsible for monitoring the Terrorist Screening Database, commonly known as the terrorist watch list. The anti-terror database includes records of individuals known or reasonably suspected to have engaged in terrorism.

It splits into two subsets with different travel implications at the airport, the selectee list and the no-fly list. After undergoing additional security, a selectee still may travel within the U.S. An individual on the no-fly list, however, cannot board a plane.

The government keeps the size of the list secret and won’t say who’s on it, arguing that increased transparency would be counterproductive to counterterrorism.

“Disclosure of an individual’s inclusion or non-inclusion in the Terrorist Screening Database or on the no-fly list,” a spokesman for the FBI’s Terrorist Screening Center told The Daily Signal, “would significantly impair the government’s ability to investigate and counteract terrorism, and protect transportation security.”

That secrecy left McClintock flightless. But when he tried to find out more, the conservative recalls, “that’s when the experience got really weird.”

He describes his exchange with officials as something surreal out of a Kafka novel:

Official: “We can’t tell you.”

McClintock: “Well what criteria did you use?”

Official: “That is classified.”

Eventually he managed to remove his name from the list but only after the California Senate spent months working with federal officials to clear his name.

The government had confused him, McClintock later learned, with a known terrorist in the Irish Republican Army.

McClintock has never visited Ireland, though. And, the California conservative adds with a laugh, he is “not now and never have been” associated with any insurgent Irish independence movement.

But he’s not the only lawmaker who has been marked as a potential terrorist.

Then-Sen. Ted Kennedy, D-Mass., was famously flagged by the no-fly list in 2004 while trying to travel from Washington back to Boston. It took weeks, The Washington Post reported, for officials to fix the error. The size of the no-fly list is secret and the FBI won’t say who’s on it. (Photo: Glen Stubbe/Minneapolis Star Tribune/ZUMA Wire)

For anyone who lacks the connections enjoyed by members of Congress, getting off the no-fly list can be even harder. That requires starting a redress process with the Department of Homeland Security to petition the FBI to reexamine its records.

But that can take years, warns Hina Shamsi, director of the National Security Project at the American Civil Liberties Union.

“It can be very hard for people who lack resources and knowledge of the system to even begin to know how to challenge it when it is so unfair,” she told The Daily Signal.

The ACLU argues that the FBI’s no-fly list violates constitutional due process safeguards because the government does not provide individuals the reasons for their placement on the list, the basis for the decision, or an appeal in a court of law.

Republicans last week defeated a measure, in both the House Appropriations Committee and on the Senate floor, that would have prohibited the sale of guns to suspected terrorists. GOP lawmakers insist that Congress should focus efforts on equipping law enforcement to fight terrorism instead.

“People have due process rights in this country,” Ryan scolded Democrats afterward, “we can’t have some government official just arbitrarily put them on a list.”

Before the House went into recess for the Fourth of July break, Ryan warned that he would block any vote on legislation that he believes strips away constitutional rights without due process.

Still, Democrats are promising to renew their push for the “no fly, no buy” legislation when Congress returns July 5.