Number of Victims Rescued From Human Trafficking Almost Doubled in 2016 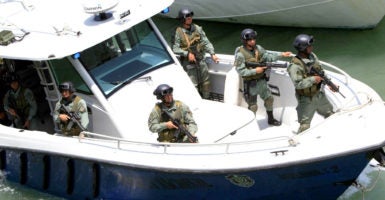 A group of policemen on a vessel takes part in the first act of a national security operation against money laundering, drug and human trafficking in Panama City, Panama. (Photo: Alejandro Bolivar/EPA/Newscom)

According to the newly released Trafficking in Persons (TIP) report, the number of human trafficking victims rescued and traffickers prosecuted nearly doubled in 2016. The statistics offer hope that greater emphasis is being placed on rule of law solutions to fight human trafficking.

Nonetheless, if you accept current estimates on the number of trafficking victims worldwide (The Walk Free Foundation estimates nearly 45 million in their Global Slavery Index), the number of victims rescued in 2016 is less than .2 percent.

In addition to evaluating Global Law Enforcement data, the TIP report ranks countries according to their compliance with minimum standards for combatting trafficking in persons from best to worst in four categories: Tier 1, Tier 2, Tier 2 Watch List, and Tier 3.

The TIP report’s findings grant credence to the longstanding argument for promoting economic freedom, or rule of law solutions, to combat human trafficking. A recent Heritage report which compared country’s tier rankings in the TIP report with their economic freedom scores in The Heritage Foundation’s 2016 “Index of Economic Freedom” noted, “[a] close examination of human trafficking and the principles of economic freedom—especially strong rule of law—reveals the robust connections between these two desirable societal outcomes.”

The TIP report’s findings demonstrate that international anti-trafficking efforts are having an impact, but also serves as a reminder to remain vigilant in instituting rule of law solutions to fight against modern-day slavery.

Part of improving rule of law requires better data to evaluate the scope of human trafficking and to serve as a benchmark for assessing anti-trafficking efforts.

The report itself highlighted this need stating:

Reliable baseline information, data, and research that illuminates the causes, prevalence, characteristics, trends, and consequences of all forms of human trafficking in various countries and cultures is crucial for developing anti-trafficking prevention strategies and measuring their impact… Accurate baseline data is critical not only in the development of prevention measures but also for accurate assessment of the impact of policies and assistance programs, including unintended negative consequences.

Notable changes in 2016 tier rankings include Thailand upgrade from Tier 3 to Tier 2 Watch List, and Burma’s downgrade to Tier 3 due to an uptick in trafficking during the Southeast Asian migrant crisis in Spring 2015 and ongoing abuse of persecuted Muslim minorities, the Rohingya.

However, much more can and must be done to eliminate human trafficking. Rule of law solutions and improving data to evaluate this global scourge must be chief among the solutions.