White House Opens Restrooms Based on Gender Identity, but Not Sure of Other Federal Buildings 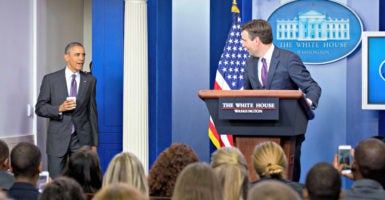 “I have to admit that I can’t speak to the bathroom policy of the federal government," says White House press secretary Josh Earnest, here with President Barack Obama on May 3 in the White House briefing room. (Photo: Amanda Lucidon /ZumaPress/Newscom)

The National Park Service says park visitors can use the restroom that matches their gender identity, but the White House isn’t sure whether the Obama administration is applying that policy to all federal government buildings.

The decision on use of public restrooms under federal control might in fact be left to individual government agencies, White House press secretary Josh Earnest said today, although the policy at the White House itself is to allow use of the restroom of choice.

“I have to admit that I can’t speak to the bathroom policy of the federal government. I think you should check with individual agencies,” Earnest said in response to a question from The Daily Signal at the Thursday press briefing.

But, Earnest added:  “I can confirm to you that that is the policy here at the White House.”

Spokespersons from both the Interior Department and the National Park Service last week confirmed to The Daily Signal that on federal lands—including national parks—men and women may use the restroom that “aligns” with their gender identity.

National Park Service spokesman Jeremy Barnum told The Daily Signal in a phone interview that national parks will continue to have men’s and women’s restrooms, but that visitors “will be free to choose” based on their gender identity.

The National Park Service has not adopted a new policy in this regard, Barnum added, because there never has been a written rule about who could use men’s and women’s restrooms. It was simply a common understanding, he said.

Sen. Bill Cassidy, R-La., chairman of the Energy and Natural Resources subcommittee on federal lands, does not support this change, Cassidy spokesman John Cummins told The Daily Signal in an email.

“The senator’s position is that persons’ biological gender should dictate what bathrooms they use,” Cummins said.

Cassidy sent a letter in May to Attorney General Loretta Lynch, Education Secretary John King, and fellow senators after the Obama administration directed schools that receive U.S. taxpayer money to allow students to use the restrooms and locker rooms that align with their gender identity—or risk losing federal funding.

Deciding which bathroom, locker room, or shower transgender students should use is the kind of issue the states, parents, school boards, communities, students, and teachers should work out in a practical way with a maximum amount of respect for the individual rights of the students who are transgender as well as the rights of those who are not. If the solutions developed by states and communities violate the equal protection guarantees of the U.S. Constitution or federal civil rights laws, federal courts are available to protect students’ rights.

“Until Congress or the courts settle the federal law,” Cassidy added, “states and school districts are free to devise their own reasonable solutions.”

The Department of Interior is charged with stewarding the nation’s public lands, waters, parks, and wildlife. The government maintains 58 national parks across the United States, visited by 307.2 million people in 2015.

The Daily Signal sought comment last week from other federal agencies to determine whether a uniform bathroom policy exists for all federal buildings and federally maintained public restrooms, and whether the administration would hold these federal buildings to the same standard it applies to local schools.