LGBT Groups Seek to Entrench Agenda at the UN 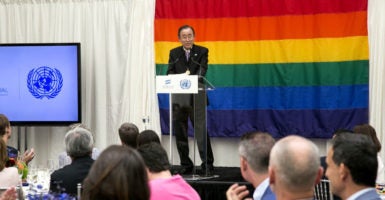 The U.N. Human Rights Council, which was created in 2006 to replace the notoriously corrupt and ineffective Commission on Human Rights, has proven disappointing in fulfilling its twofold mandate of promoting the human rights enumerated in international law and holding governments accountable when they violate individuals’ fundamental freedoms.

Its meetings in Geneva are often a forum for liberal non-governmental organizations and their likeminded allies to further their myriad pet agendas, be they anti-Israel, pro-abortion, or, more recently, LGBT issues.

Instead, its meetings in Geneva are often a forum for liberal non-governmental organizations and their likeminded allies to further their myriad pet agendas, be they anti-Israel, pro-abortion, or, more recently, LGBT issues.

The current session of the Human Rights Council opened this month, amid rumors that a group of South American countries, at the behest of LGBT organizations, would put forward a resolution to create a new independent expert or special rapporteur position for the promotion of sexual orientation and gender identity issues.

Institutionally, the U.N. leadership and bureaucracy have been pushing for greater recognition of so-called LGBT rights in recent years, in spite of strong opposition to such issues on the part of most U.N. member states, which prefer to defend their cultural and religious norms from what Pope Francis has called “ideological colonization.”

The U.N. recently created the U.N. Free and Equal Campaign, which has been the epicenter of the bureaucratic efforts to promote and institutionalize the LGBT agenda.

Should this project gain more official status—on the level of U.N. Women, for example—its influence and resources would pose an even greater threat to the interests of the family, the institution of marriage, and religious liberty.

As it is, the Free and Equal Campaign has undertaken a variety of high-profile projects—including slickly produced videos, reports, and aggressive PR campaigns, such as the creation of LGBT themed postage stamps.

Last year, a number of U.N. agencies released a joint statement on “Ending Violence and Discrimination against Lesbian, Gay, Bisexual, Transgender and Intersex People,” calling on all member states to take steps to protect LGBT rights.

All people have an equal right to live free from violence, persecution, discrimination and stigma. International human rights law establishes legal obligations on states to ensure that every person, without distinction, can enjoy these rights.

Unfortunately, many of the policy prescriptions that these U.N. entities call for—such as same-sex marriage and mandated affirmation of subjective gender identities—amount to the creation of special rights for LGBT people, often at the expense of others’ rights of religion and conscience.

The creation of a new special rapporteur position for LGBT issues would serve to legitimize the claim that sexual orientation and gender identity is a sound basis for granting rights.

That claim is flawed and neglects the bigger picture, whereby all individuals are entitled to exercise their human rights—enumerated in the U.N.’s founding documents and codified in existing human rights treaties—on the grounds of their common human dignity, not subjective sexual identity.

Within the U.N.’s human rights framework, more than 50 expert positions, or special procedures, already exist—including those whose mandates cover: adequate housing; education; freedom of religion or belief; the enjoyment of the highest attainable standard of physical and mental health; privacy; the rights of migrants; the right to safe drinking water and sanitation; and contemporary forms of racism, racial discrimination, xenophobia, and related intolerance.

These seemingly diverse mandates share in common the fact that they are all tethered to, or borne out of, an existing legal instrument that U.N. member states have negotiated and signed on to. On the other hand, so-called sexual orientation and gender identity rights do not exist in the U.N. Declaration of Human Rights or other U.N. treaties.

Therefore, a sexual orientation and gender identity special rapporteur would be categorically different from the positions of other human right experts, and would largely serve to advance a liberal LGBT agenda that has not been negotiated, codified, or accepted by most U.N. member states.

While the U.S. has aggressively furthered the LGBT agenda under the Obama administration, other U.N. member states that seek to defend marriage, family, religious liberty, and their cultures, would be wise to resist this latest push by liberal organizations and their bureaucratic allies at the U.N.