A Dustup at UNC Over Christmas Vacation and Other Microaggressions 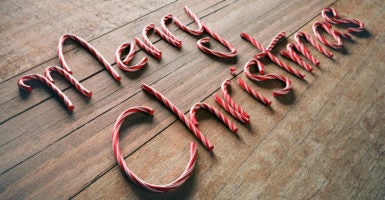 The University of North Carolina at Chapel Hill caused an outcry when it published “microaggression guidelines” on a college forum. Although UNC quickly removed the post from public view, some students say the standards represent positive change.

The post on microaggressions, removed quickly after it was published last week on UNC’s online Employee Forum, cautioned employees against “brief and commonplace” displays of “implicit bias,” such as sex-specific dress codes, staff meetings at country clubs, religious vacations, and the phrase “that’s so gay.”

Below are screenshots of the guidelines, provided by Campus Reform: The Employee Forum is a group of more than 50 elected delegates from UNC’s nonfaculty employees that exists to develop “proactive, progressive recommendations” for the school’s administration. It says it aims to foster “an open and positive environment throughout the university community,” according to its website.

The term microaggression, coined in the 1970s, is used to describe the degradation of a “socially marginalized” group through intentional or unintentional verbal putdowns.

Conservatives on the UNC campus cried foul at the guidelines, which they said amounted to liberal policing of free speech.

The guidelines warned employees against such displays of “implicit bias” as staff meetings at country clubs or the phrase “that’s so gay.”

“Once again, students at UNC are seeing the strong liberal biases of our administration and faculty play out in the day-to-day operations of our university,” Frank Pray, chairman emeritus of UNC College Republicans, told The Daily Signal in an email.

This microaggression guide telling university employees how to act serves to further the victim complex exhibited by much of the left at our school and demonize conservative students as aggressors.

But other students argued that the guidelines were not intended to squelch speech, but simply to help people consider how their words affect others.

“Ultimately, we’re at a college campus to learn and not to compliment each other’s appearance or to make assumptions about people’s gender, religion, or sexual orientation,” Courtney Sams, president of UNC Young Democrats, told The Daily Signal in a telephone interview.

“Before these guidelines were published, you didn’t see many people talking about it,” Sams added. “People are thinking more critically about the words that they say. They may not agree with everything that the guidelines set forth, but they are thinking about them, so that’s a start.”

In an official statement, Joel Curran, UNC’s vice chancellor for communications and public affairs, said the Employee Forum did not represent either formal or informal university policy.

Curran also stressed that the college’s efforts to protect free speech had earned them “the highest ‘green light’ rating” from the Foundation for Individual Rights in Education, a nonprofit that works to ensure free speech rights on college campuses.

Azhar Majeed, that group’s director of policy reform, agreed with Curran, saying the university had no policies limiting free speech on the books.

The “green light” rating “indicates that a university maintains no written policies that imperil student and faculty free speech rights,” Majeed told The Daily Signal in an email. “UNC Chapel Hill earned the green light rating last year by working with FIRE to bring all of its policies into compliance with the requirements of the First Amendment.”

In the past year, college news site Campus Reform has reported on pro-life chalk messages at UNC being erased by a pro-choice group that found them offensive. It also reported on a leftist group staging a walkout from a public lecture by conservative speaker Ben Shapiro and an official “diversity dinner” to which conservative groups were not invited.

Pray, of the UNC College Republicans, told The Daily Signal:

On the heels of a recent study showing the overwhelming tilt of our faculty toward leftism, something any conservative student could have told you without even looking up the numbers, I am hardly surprised that the university has once again failed to live up to its goals of the free exchange of ideas and a true liberal arts education.