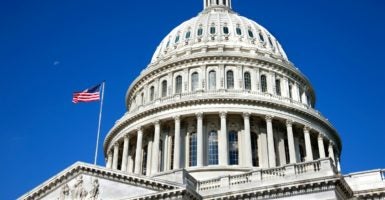 This is a critical moment for biotechnology and agriculture. The Senate should do the right thing, even if it means committing itself to a longer fight. (Photo: iStock Photos)

Senate agriculture leaders have come up with misguided legislation that would mandate labels for genetically engineered food (GMO).

Here are some quick points that policymakers should consider regarding this legislation:

2. Ignoring the Problems With Mandatory Labeling

A federal mandate has the same problems as any state mandate. It may create uniformity, but creating uniform bad policy doesn’t make it good policy. Federal mandatory labeling would, among other things:

Even worse, the federal government, not just one small state, would be providing legitimacy to mandatory labeling.

3. Puts the Cart Before the Horse

There is a rush to get ahead of Vermont’s state mandatory law, which goes into effect on July 1. However, the law won’t be enforced until 2017. Also, the so-called patchwork of state laws problem doesn’t even exist. In fact, there’s not one other state law that is even set to go into effect. This rush is coming at the expense of developing sound policy.

4. Negative Message About US Agriculture

5. There’s No Turning Back

Once the federal government gives the green light to mandatory labeling, there’s no turning back. It’s highly unlikely that this bad policy will ever get undone. While the Senate bill provides a little flexibility in how the information is disclosed (such as through bar codes), compared to the Vermont law (requiring on-package labels), the same misleading message is still being conveyed.

It’s also only a matter of time before on-package labeling would be required. Once Congress concedes that mandatory labeling is necessary, that battle is lost, and the fight only becomes how intrusive the labeling will ultimately become.

Ironically, those who have opposed mandatory labeling (generally the conservatives) will be the ones considered the champions of this major new federal law that requires mandatory labeling (most support for the Senate bill is expected to come from conservatives). They will be seen as the champions who helped require the disclosure of a negative message about agricultural biotechnology and ignored the science.

The proponents of mandatory labeling (generally the liberals) aren’t expected to be as supportive of this bill and won’t be “blamed” for this massive new federal regulatory scheme.

This bill is far more important than the short-term compliance costs for industry. Congress should never pass a law that it knows is both misleading and contradictory to the science.

This is a critical moment for biotechnology and agriculture. The Senate should do the right thing, even if it means committing itself to a longer fight.