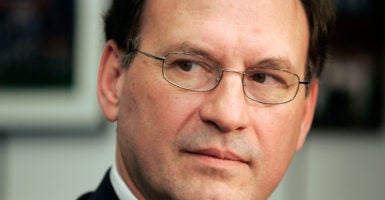 The Supreme Court’s decision not to hear a case challenging a Washington state law that forces a family-owned pharmacy to dispense emergency contraceptives is an “ominous sign” for those who value religious freedom, Justice Samuel A. Alito Jr. said.

“If this is a sign of how religious liberty claims will be treated in the years ahead, those who value religious freedom have cause for great concern,” Alito said Tuesday in a critical dissent.

Alito was joined in his dissent by Chief Justice John G. Roberts Jr. and Justice Clarence Thomas, falling one justice short of the four needed for the court to accept a case.

The case involves the Storman family, owners of Ralph’s Thriftway, a small, family-run grocery store and pharmacy in Olympia, Wash. In 2007, after Washington state passed a law that requires all pharmacies to dispense “all lawfully prescribed drugs or devices” in a timely manner to all customers, the Stormans found themselves in the cultural crosshairs.

“Those who value religious freedom have cause for great concern,” says Supreme Court Justice Samuel Alito.

Because of their Christian belief that life begins at conception, the Stormans objected to dispensing drugs such as Plan B that they believe aid in the destruction of human life.

Kevin and Greg Storman took over the family business from their grandfather, Ralph Storman, who started the company in 1944. (Photo: The Daily Signal/Kelsey Harkness)

Under the state law, denying Plan B could result in the Stormans losing their pharmacy license.

The Stormans then entered a long legal battle. In February 2012, a federal court struck down the law as unconstitutional. The court found “abundant evidence” that the law was designed to force religious pharmacists and pharmacy owners to violate their faith.

But last July, the 9th Circuit Court of Appeals reversed that decision, upholding the law mandating pharmacists to dispense legal drugs and devices. The Supreme Court’s decision not to hear the case today allows the 9th Circuit’s ruling—and the law—to stand.

If a customer at Ralph’s Thriftway requests a drug such as Plan B, employees refer customers to other local pharmacies that do carry the drug. According to court documents, over 30 pharmacies and drug stores within five miles of Ralph’s carry Plan B, and none of Ralph’s customers has ever been denied timely access to Plan B or other emergency contraceptives.

Alito, in his dissent, suggested the 2007 law, which is unique to Washington state, was designed specifically to target Christian believers.

“There are strong reasons to doubt whether the regulations were adopted for—or that they actually serve—any legitimate purpose,” Alito wrote, adding:

And there is much evidence that the impetus for the adoption of the regulations was hostility to pharmacists whose religious beliefs regarding abortion and contraception are out of step with prevailing opinion in the State. Yet the 9th Circuit held that the regulations do not violate the First Amendment, and this court does not deem the case worthy of our time.

Kristen Waggoner, a senior attorney at Alliance Defending Freedom who has defended the Stormans for a decade, expressed disappointment that the high court opted not to take the case.

“All Americans should be free to peacefully live and work consistent with their faith without fear of unjust punishment, and no one should be forced to participate in the taking of human life,” Waggoner said in a prepared statement. “We had hoped that the U.S. Supreme Court would take this opportunity to reaffirm these long-held principles.”

The Daily Signal last week interviewed Greg Storman about why the family-run pharmacy objects to dispensing Plan B.

While the Stormans were the public face of this case, two other pharmacists facing a similar dilemma were a part of the challenge.

Margo Thelen, another pharmacist in Washington state, also objected to being forced to dispense emergency contraceptives because of her religious beliefs. (Photo: The Daily Signal/Kelsey Harkness)

Margo Thelen is one of them. Earlier this year, during an interview with The Daily Signal, Thelen said she would not dispense Plan B even if it meant losing her pharmacist’s license. Now, her future is unclear.

In his 15-page dissent, Alito confronted her dilemma head-on: “Violate your sincerely held religious beliefs or get out of the pharmacy business.”