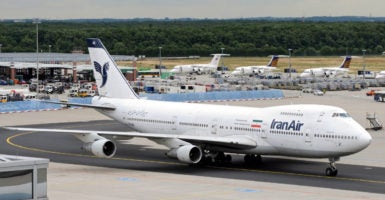 With the blessing of the Obama administration, Boeing Co. has negotiated the sale of a fleet of new jets to the world’s foremost state sponsor of terrorism.

The $17.6 billion deal between the aviation giant and the Islamic Republic of Iran was made possible by the lifting of economic sanctions against Tehran in January. It is a reckless piece of business that Congress must address.

The carrier, according to the U.S. Department of Treasury, has been routinely commandeered by the Islamic Revolutionary Guard Corps and Iran’s Ministry of Defense and Armed Forces Logistics to transport rockets, missiles, and other military equipment, including materials and technologies with ballistic missile applications.

None of which concerns President Barack Obama, evidently. His nuclear deal with the ayatollahs, including $150 billion in sequestered funds, specifically lifted restrictions on the sale of commercial aircraft. Indeed, enabling Iran to modernize its timeworn fleet was “essential” to striking agreement with Tehran to (supposedly) restrict its nuclear operations in return for easing economic sanctions, according to Boeing executives.

To complete the sale, Boeing still must obtain an export license from the U.S. Department of Treasury’s Office of Foreign Asset Control. Should a U.S. bank or investment firm wish to finance the purchase, it, too, would have to obtain a license from the Office of Foreign Asset Control. (Officials of the U.S. Export-Import Bank have said the bank charter prohibits financing for Iran, but they aren’t the most credible bunch.)

This “licensing” procedure seems downright silly considering that Iran has been designated for years by the U.S. Department of State as “the leading state sponsor of terrorism globally.” As noted in the 2015 edition of the Country Reports on Terrorism, “Iran continues to provide support to Hizballah, Palestinian terrorist groups in Gaza, and various groups in Iraq and throughout the Middle East.”

There is little reason to think that U.S. engagement with Iran is now moderating the regime, according to James Phillips, The Heritage Foundation’s senior research fellow for Middle Eastern affairs. Despite the agreement, he reports, the Islamic Revolutionary Guard Corps has repeatedly challenged U.S. naval forces in the Persian Gulf.

For example, the Guard Corps vessels launched rockets within 1,500 yards of the carrier Harry S. Truman near the Strait of Hormuz in late December, and in January flew drones over U.S. warships and detained and humiliated 10 American sailors. In March, the Guard Corps launched a series of missiles, including two that were emblazoned with the message “Israel must be wiped out” in Hebrew.

To their credit, Reps. Jeb Hensarling, R-Texas, and Peter Roskam, R-Ill., aren’t quite as trusting of Iran as the Obama administration. In a June 16 letter to Boeing CEO Dennis Muilenburg, the lawmakers said they “strongly oppose the potential sale of militarily-fungible products to terrorism’s central supplier,” and sought assurances that the company would repossess or remotely disable aircraft if Iran violated the nuclear deal.

Meanwhile, Roskam has introduced the No Dollars for Ayatollahs Act, which would impose an excise tax of 100 percent on any transaction that involves Iran conducting a financial transaction in U.S. currency.

According to Roskam, “It’s tragic to watch such an iconic American company make such a terribly short-sighted decision. If Boeing goes through with this deal, the company will forever be associated with Iran’s chief export: radical Islamic terrorism.”

In addition, Rep. Charles Boustany, R-La., has introduced the Preventing Investment in Terrorist Regimes Act, which would deny U.S. tax credit to Boeing for the foreign taxes it would pay on the income derived from the Iranian deal.

Both measures are co-sponsored by all six subcommittee chairs of the House Ways and Means Committee. But whether either measure would prove effective in halting the sale, using the tax code to steer the actions of a multinational corporation is a lousy way to set policy.

Besides, Boeing generated more than $96 billion in revenue last year, and its market cap exceeds $86 billion. It also paid a lot of money to lobby in favor of the nuclear deal, including hiring Thomas Pickering, a former ambassador to Israel and the United Nations, to testify before Congress, write letters to high-level officials, and submit op-eds in support of lifting the sanctions. All of which is perfectly acceptable—except that he systematically failed to disclose his relationship with Boeing.

Boeing executives say the proposed sale is necessary to remain competitive against Airbus, the European aviation manufacturer that has struck a $27 billion deal with Iran for 118 planes. But that’s the same lame argument Boeing made in lobbying for reauthorization of the Export-Import Bank—from which Boeing was the top beneficiary of export subsidies.

The fact is, projected demand for commercial planes is forecast to rise for years to come, and both manufacturers are carrying huge backlogs that will take years to fulfill.

Rather than tweak the tax code, Congress should, at the very least, explicitly prohibit financing from the Export-Import Bank for the sale of Boeing planes (or any other product) to Iran.

Additional actions are needed as well. The administration has already increased the risk of yet more death and destruction by the terrorist state. Lawmakers should ensure that Boeing and other U.S. companies don’t become tools of Tehran.