For Britain, June 23 Is Independence Day 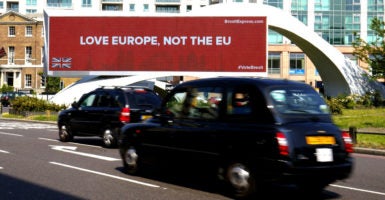 It is a triumph for the simple idea that Britain should be governed by the British people. (Photo: Tolga Akmen/Zuma Press/Newscom)

In a historic referendum, by a margin of a million votes, the British people have decided to leave the European Union. Brexit is no longer a dream. It is a fact.

It is a triumph for the simple idea that Britain should be governed by the British people.

This is a momentous event in British history, and a dark day for the European Project. It is a victory for all Britons who voted.

It is a triumph for the simple idea that Britain should be governed by the British people. And it is a tremendous, crushing rebuke for the European Union, and its desire to override the sovereignty of the nations of Europe.

Brexit’s victory is a remarkable triumph. Virtually every major international organization opposed it, as did President Barack Obama and many other national leaders.

The strength and independence of the British people has rarely shown through more clearly than it has in their determination to make up their own mind on this fundamental question.

The European Union must respect this vote. There have been other referenda on the EU across Europe. When the EU has lost, its answer has always been to demand another vote until the people get it right. That cannot happen this time.

The interests of the U.S now lie in getting the U.K. out of the European Union as fast as possible, with as little disruption as possible. It is in the enlightened self-interest of the EU for this to happen as well. Any retaliation against the U.K. would be extremely ill-advised.

If it does not, it will lose more members, become poorer and poorer, and steadily lose even more influence. The choice is the European Union’s.

On June 23 Britain made its choice. And that choice was for independence.