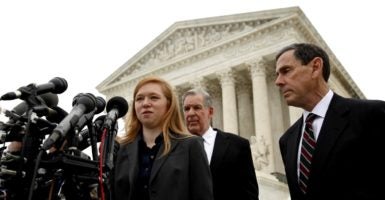 The Supreme Court issued its disappointing decision in Abigail Fisher’s case on Thursday against the University of Texas at Austin.

In an opinion by Justice Anthony Kennedy, four members of the court ruled that the university’s race-conscious admissions program does not violate the Equal Protection Clause of the Constitution. Justices Clarence Thomas and Samuel Alito wrote dissenting opinions (Chief Justice John Roberts joined the latter; Justice Elena Kagan was recused from the case).

This case deals with whether it is constitutional for the university to discriminate on the basis of race in its undergraduate admissions decisions. Fisher, a white Texas resident, sued the school after she was denied admission, arguing that the school discriminated against her. Under the Supreme Court’s existing case law, schools may use race in admissions only if it is narrowly tailored to further compelling governmental interests.

The court explained in Grutter v. Bollinger (2003) that before putting a thumb on the race scales, a school must pursue a “serious, good faith consideration of workable race-neutral alternatives that will achieve the diversity the university seeks.”

Texas adopted a plan in the mid-1990s that automatically admitted Texas students in the top 10 percent of their high school class to all state-funded universities. Following a 2003 Supreme Court decision that authorized schools to consider race or ethnicity as a “plus factor,” the university began subjecting applicants for the remaining spots to a “holistic review” that included preferences for certain racial minorities.

Fisher did not graduate in the top 10 percent, so her application for admission was in competition with candidates who received racial preferences. She challenged the university’s discriminatory admissions process in court after her application was denied because minority students with lower qualifications and grades than her were admitted to the school.

>>>To Read More on This Topic: “Discriminatory Racial Preferences in College Admissions Return to the Supreme Court: Fisher v. University of Texas at Austin“

The university argued that it needs to discriminate based on the race of applicants for the seats not filled by top 10 percent admittees to advance its interest in “qualitative diversity.” It claimed that the top 10 percent plan admits “too many” minority students from majority-minority schools—apparently they don’t provide the “right” kind of diversity, according to UT Austin admissions officials.

This racial balancing is nothing more than government-sanctioned discrimination. And in the middle of the litigation, it was revealed that the university had another, secret admissions process that also provided special preferences for the sons and daughters of politically-connected individuals.

This is the second time Fisher’s case has reached the Supreme Court. Last time around, the justices told the university that it must prove that its use of race in admissions is narrowly tailored to further a compelling state interest and chastised the lower courts for simply accepting the university’s claim without holding it to the strict evidentiary standard required by the 14th Amendment’s Equal Protection Clause. The case went back to the lower court, which essentially rubber-stamped the university’s claim once again.

In today’s ruling, a majority of the court decided to take the university at its word that it needed to use race-conscious admissions because the top 10 percent plan alone was not sufficient to meet its “diversity goals.” As Alito pointed out in his thorough and stirring dissent, this decision allows school officials to “justify systematic racial discrimination simply by asserting that such discrimination is necessary to achieve ‘the educational benefits of diversity,’ without explaining—much less proving—why the discrimination is needed or how the discriminatory plan is well crafted to serve its objectives.”

He further noted that the university had never offered a “coherent explanation for its asserted need to discriminate on the basis of race” but instead relied on “unsupported and noxious racial assumptions.” Thomas also dissented, arguing that the Constitution “abhors classifications based on race,” and that “does not change in the face of a ‘faddish theory’ that racial discrimination may produce ‘educational benefits.’”

This is a terrible loss for advocates of a truly colorblind society, a betrayal of our core beliefs as Americans, and fundamentally unfair to students. Rather than require the university to meet the strict standard required by the Constitution, a majority of the justices allowed the school to continue sorting prospective students by race and ethnicity.

Given the university’s defiant attitude throughout the length of this litigation, Kennedy also seemed a bit naïve when he says that the Supreme Court’s affirmance of UT Austin’s admissions policies doesn’t mean that the university doesn’t have an “ongoing obligation to engage in constant deliberation and continued reflection regarding its admissions policies.” The only “reflection” UT Austin is likely to engage in is how to further discriminate.

Luckily, other lawsuits are currently pending in federal district courts that challenge the racially discriminatory admissions policies of Harvard University and the University of North Carolina at Chapel Hill.

The Harvard suit was brought by Asian-American applicants who claim they were denied admission because the university has put limits on the number of Asian-Americans it will admit, similar to the racist quotas and caps that Ivy League schools put on the number of Jewish students they would admit in the 1920s. The plaintiffs in the case against the University of North Carolina point out that the university did a study that showed that if the school dropped its racial preference policy and switched to a top 10 percent plan like Texas, the number of minorities would actually increase.

Additionally, more than 130 Asian-American organizations filed a complaint with the U.S. Department of Education to investigate the admissions policies at Yale University, Brown University, and Dartmouth College. Though it may be the end of the road for Fisher, the next wave of challenges to racially-discriminatory college admissions has only just begun.

Let’s hope this view ultimately prevails at the Supreme Court.