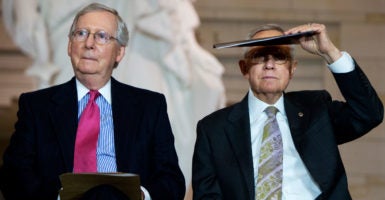 In the aftermath of the terrorist attack in Orlando—the largest in the United States since 9/11—lawmakers on Capitol Hill have yet to introduce one piece of legislation that would actually fight terrorism. Not one.

The focus on gun control continues in the world’s greatest deliberative body and any real measures to fight terrorism are nowhere to be found.

Instead, the Republican-controlled Senate has not only allowed Democrats to define the debate and make this an issue about gun control, but they’ve joined the tour de farce.

That President Barack Obama and congressional Democrats once again called for more gun control in the wake of the tragedy is no surprise. It’s completely predictable.

But didn’t anyone expect a different strategy from Senate Republicans?

If you did, you were sadly disappointed as the GOP matched the Democrats amendment for amendment, suggesting both parties believe the No. 1 way to protect the American people from terrorism at home is more gun control.

None of the amendments introduced by either party were able to muster the 60 votes needed to pass but Democrats won the debate on defining the issue at hand.

>>> See How Your Senators Voted on 4 Gun Control Amendments

If you need further proof, a “bipartisan” gun control measure is now being introduced by Maine Republican Sen. Susan Collins. And right on cue, Senate Majority Leader Mitch McConnell, R-Ky, has promised a vote on it Thursday. So, the focus on gun control continues in the world’s greatest deliberative body, while any real measures to fight terrorism are nowhere to be found.

Orlando was the 22nd instance of Islamist terrorism in the United States since 2015. There is an urgent need for Congress to contend with how best to combat terrorism and there are plenty of policies and ideas on the table: from ensuring the FBI and CIA have the investigative tools they need to identify threats before they happen to increased training for local and state law enforcement officers. As is evident from the terrorist attacks in Paris, better intelligence and sharing of information across law enforcement agencies, not more gun control laws, is what is needed in this fight.  France has some of the toughest gun control laws in Europe and it did not deter the Islamist terrorists intent on killing. Why do we think it will be different here?

And while in an election year it might be next to impossible to pass legislation related to border security and refugee policies, it seems the GOP, for the good of the country, and potentially to its own political benefit, should force the debate.

This might also be a good time for Republicans to point out that the Obama administration’s counterterrorism strategy is not protecting Americans at home and it is failing abroad. The two are closely linked.

As CIA Director John Brennan testified just last week, “Despite all our progress against [the Islamic State] on the battlefield and in the financial realm, our efforts have not reduced the group’s terrorism capacity and global reach.”

>>> Taking Away Constitutional Rights at the Discretion of the Government

It was also recently reported that over 50 current State Department officials, mostly apolitical appointees, have signed an internal memo harshly criticizing Obama’s policy toward Syria and suggesting our efforts to defeat ISIS will be greatly hampered until our policy in dealing with the Assad regime changes.

How about a hearing on that or a few remarks on the Senate floor? I guess there wasn’t time as the Democrats were holding a filibuster on gun control.