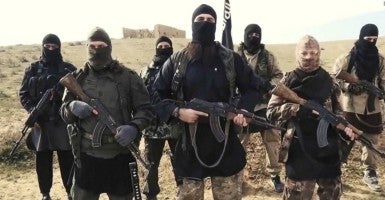 No one displaced from their homeland has it easy, but targeted religious minorities, such as those persecuted by the Islamic State, have faced a worse crisis, said Andrew Walther, vice president of the national Knights of Columbus.

“It’s very hard to be any refugee, but to be targeted for extermination because of your religious beliefs is a qualitatively different experience,” Walther told The Daily Signal in a phone interview on World Refugee Day.

Just two weeks ago, Walther traveled to the Middle East and saw some of the victims of Islamic State, also known as ISIS and ISIL.

“I saw people who were persecuted for their faith,” Walther said. “They didn’t do anything wrong but be who they were and live in the region where their families had lived for 1,000 years, but were targeted by this extremist ideology. Some were kidnapped, murdered, and raped.”

The Knights of Columbus, a Catholic fraternal organization, determined ISIS was committing genocide against Christians in the Middle East after conducting a fact-finding mission in March for the State Department. Afterward, the State Department said ISIS was committing genocide against Yazidis, a Kurdish religious minority, and Shiite Muslims as well.

Referring to the larger global problem of all refugees, President Barack Obama marked World Refugee Day by announcing he will hold a “Leaders’ Summit on Refugees” when the United Nations General Assembly convenes in September.

In a formal statement Monday, Obama said he will call for other governments to contribute more to solve global problems. He noted the United States contributes more to refugee relief than any other country in the world:

In advance of that summit, the United States is urging other governments to contribute more funding for humanitarian aid operations, to grant more refugees the chance to work and attend school, and to provide more resettlement opportunities for refugees who cannot safely go home or remain where they are. We are urging our nongovernmental partners, including the private sector, to do more as well.

However, Walther said that most aid is targeted at individuals, and is rarely aimed at helping whole communities.

@KofC VP: “They didn’t do anything wrong but be who they were.”

“It’s important to understand that Christian refugees only get financial support from charitable agencies,” he said.

Walther said beyond making a proclamation of genocide, the U.S. government could have a plan for the liberation of ISIS-held areas to help return those refugees who were forcibly evicted and make long-term commitments to survivors.

The federal government should use its refugee process to prioritize assistance to all groups persecuted by ISIS as well as other communities facing genocide, said Olivia Enos, a research associate at the Asian Studies Center of The Heritage Foundation.

“ISIS perpetrators of genocide should be punished. There are tools within [the Treasury Department] that can be used to freeze the assets of persons found to carry out genocide,” Enos told The Daily Signal in an email, adding, “Justice should be brought for victims. Legal solutions should be evaluated to determine proper means of delivering justice.”

In a recent demonstration of the continuing crisis, the United Nations reported Sunday that 80,000 civilians fled Fallujah amid combat between the Islamic State and Iraqi military. Fallujah does not have a Christian population to speak of, Walther said.

In other areas of Iraq and Syria—where Christianity has deeper roots–the Christian population has dropped dramatically.

Between 80 percent and 90 percent of Christians–more than 1.3 million people–have fled Iraq, according to the Knights of Columbus.

Iraq ranks third in the world for Christian persecution, according to Open Doors, an organization that serves persecuted Christians globally. ISIS drove about 125,000 Christians from their homes in Mosul and the surrounding Nineveh region. More than 70 percent of Christians have fled Iraq since the war in 2003, the group says.

Another 1 million Christians fled Syria, which would be about two-thirds of that country’s Christian population, according to the Knights of Columbus. In Syria, which ranks fourth in the world for Christian persecution, Christians once made up 30 percent of the population, but now make up only 10 percent. As of March 2015, ISIS has murdered about 220,000 Christians, while 700,000 were displaced.

The Rev. Douglas Bazi has taken in 200 families in the Mar Elia Refugee Center in Erbil, Iraq, according to the Knights of Columbus.

“Not only is Syria part of the roots of Christianity, but Christianity is also a source of pluralism in the area,” Walther said.