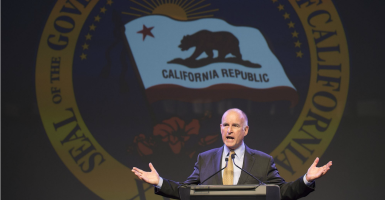 California Gov. Jerry Brown signed a bill to expand Obamacare to cover illegal immigrants, but now it’s up to the Obama administration to determine if the nation’s largest state will get an exemption related to a specific promise the president made when trying to sell the health care law.

The Golden State will be asking the U.S. Department of Health and Human Services for a “State Innovation Waiver” under Section 1332 of the Affordable Care Act, better known as Obamacare. This would allow illegal immigrants in the state to purchase private health insurance plans from the California exchange, Covered California, but would not make them eligible for federal subsidies.

“This was one of the clear, explicit promises the president made during the debate about Obamacare,” Grace-Marie Turner, president of the Galen Institute, a health free market advocacy group, told The Daily Signal. “It’s totally up to the administration. The president’s goal is to get as many people signed up for the exchanges as possible.”

Without subsidies, this would not technically violate the president’s promise, Turner said.  However, she believes this is an incremental step by California.

“The problem is that if subsidies are extended to non-citizens, that will squeeze out the doctors available for those who came here legally and American citizens,” Turner said. “We cannot subsidize the whole world through Obamacare.”

If the HHS grants the waiver to California, it would extend for five years, under a provision of the Obamacare law. To qualify for a “State Innovation Waiver,” a state must prove it is using innovative strategies to provide “comprehensive and affordable” health care.

HHS did not respond to phone and email inquiries Thursday and Friday from The Daily Signal.

White House press secretary Josh Earnest said passing such a law is up to California, but he didn’t know whether the administration would oppose the move as inconsistent with President Barack Obama’s pledge from 2009 and 2010.

“This is a state policy. I’m not aware of the policy decision that they’ve made, so I’d refer you to my counterpart in Gov. Brown’s office for an answer about why they’ve chosen to pursue it,” Earnest told The Daily Signal at the White House press briefing, adding:

It is correct that it is different than the policy that the federal government has pursued. So that fact is true. But again, as a variety of Republican governors have not hesitated to demonstrate, they are, in many cases, willing to use their own authority as they choose.

Brown, a Democrat, signed Senate Bill 10 on June 10, but his office had little to say on the matter.

“Yes, the governor signed SB 10. We have not issued a statement and have let the signature speak for itself,” Brown’s deputy press secretary, Gareth Lacy, told The Daily Signal in an email.

@gracemarietweet says, “This was one of the clear, explicit promises the president made.”

It’s a touchy enough subject that Joseph Antos, the Wilson H. Taylor scholar in health and retirement policy for the American Enterprise Institute, believes Obama might just leave it for the next president to decide.

“Covered California is the most heavily regulated exchange market in the country,” Antos told The Daily Signal. “Presumably, illegal immigrants are low income and won’t buy the plans if they are not eligible for subsidies. This could just be a political gesture from Brown to get their foot in the door.”

“If the money isn’t there, it’s not going to happen,” Antos said. “Expanding the risk pool through adding people unable to pay for the services is going add cost, not revenue. That will create difficulty.”

The legislation may have little practical effect without subsidies, said Ed Haislmaier, senior research fellow for the Center for Health Policy Studies at The Heritage Foundation.