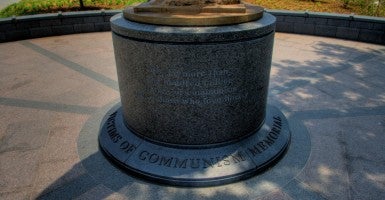 “We here are all too familiar with the stories of the more than 100 million victims of communism, the deadliest ‘ism’ of the 20th century,” Victims of Communism Memorial Foundation Chairman Lee Edwards said. (Photo: Douglas Graham/Roll Call Photos/Newscom)

As the world marked the 27th anniversary of the massacre of students in Tiananmen Square, a group gathered at the Victims of Communism Memorial  to remember the casualties of oppressive Marxist regimes and to honor those who have worked tirelessly on their behalf.

Representatives from nonprofit groups and more than 20 embassies laid commemorative wreaths June 10 at the foot of the memorial’s “Goddess of Democracy” statue, a replica of the one raised in Tiananmen Square by protesting Chinese students in the summer of 1989.

“We here are all too familiar with the stories of the more than 100 million victims of communism, the deadliest ‘ism’ of the 20th century,” Victims of Communism Memorial Foundation Chairman Lee Edwards said, according to his prepared remarks. “And so we resolve to remember them and their ultimate sacrifice.”

Lee Edwards is also the distinguished fellow in conservative thought at The Heritage Foundation’s B. Kenneth Simon Center for Principles and Politics.

The foundation specifically honored Paul Goble, formerly of the State Department and CIA, for a career of opposition to tyranny spanning decades, disciplines, and continents, from academia to public policy to print, radio, and web journalism. Goble received the foundation’s annual Reagan-Truman Medal of Freedom.

“To listen carefully, to be watchful, to forewarn, and to proclaim,” Edwards said. “That has been Paul Goble’s life-long mission.”

In his acceptance speech, Goble warned that anti-communist sentiment, far from antiquated, remains critically important to this day.

“Vast numbers of people still live under communist dictatorships in China, Vietnam, Cuba, and elsewhere,” Goble said, according to his prepared remarks. “History did not end, and the clash of civilizations did not eliminate the importance of ideology, however much some hoped for that outcome.”

The foundation also recognized Cuban civil and human rights activist Sirley Ávila León, a former legislator who faced harsh persecution due to her public opposition to the practices of the Communist Party.

León is missing her left hand and uses a wheelchair, the result of a brutal machete attack in 2015 by a State Security agent she knew by name. Following the assault, she convalesced at home until she was able to obtain a medical visa for treatment in the U.S.

“I was unaware as yet of the monster that I was facing… whose claim that power originates in the people is a constant lie.” —Sirley Ávila León

Elected to Cuba’s Municipal Assembly of People’s Power in 2005, León said in her speech that she fought unceasingly for the rights of the rural citizens in her district of Limones, whose three primary schools were demolished in 1992 to construct a reservoir under Cuban President Fidel Castro’s new hydraulic plan, leaving many destitute.

“Trusting in the Fidel Castro quote that I often heard in the media, that revolution means ‘changing everything that must be changed,’ I gave my word to the farmers that I would fight to change their situation, no matter the consequences,” León said in a translated transcript.

“I was unaware as yet of the monster that I was facing, unaware of the lack of rights and the dictatorship that exists in Cuba, a dictatorship that is capable of anything to keep itself in power and whose claim that power originates in the people is a constant lie.”

After she refused to submit quietly to the Castro regime, León said, she was sacked from her position and threatened repeatedly. After continuing to protest the government’s human rights abuses, her property was repeatedly vandalized, and she endured prolonged harassment which culminated in the attack.

Although León is currently living in the United States on a medical visa, she said she will return to Cuba to continue her activism as soon as her health permits.