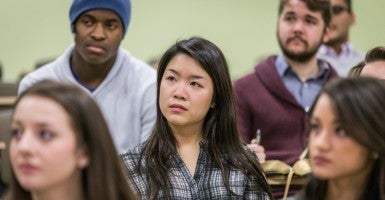 Any day now the U.S. Supreme Court will hand down its decision in Abigail Fisher’s discrimination suit against the University of Texas at Austin. However the justices rule in that case, more lawsuits challenging schools’ discriminatory admissions programs are likely to come.

In May, the Asian American Coalition for Education and 130 other Asian-American groups asked the U.S. Department of Education and the Justice Department to investigate Yale University, Brown University, and Dartmouth College for their use of discriminatory admissions policies, which they claim amount to “race-based quotas” that lock out well-qualified Asian-American applicants.

They point to data from the Department of Education showing that Asian-American enrollment at Brown and Yale has been stagnant since 1995 and at Dartmouth since 2004 despite an increase in highly qualified Asian-American students applying to these schools during that time.

The groups highlight in their complaint that Asian-American applicants with almost perfect SAT scores, GPAs in the top 1 percent, and excellent extracurricular records have been routinely rejected from top schools, while similar candidates of other races are accepted.

In fact, data show that Asian-Americans must score, on average, “approximately 140 point[s] higher than a White student, 270 points higher than a Hispanic student and 450 points higher than a Black student on the SAT, in order to have the same chance of admission.” The groups suspect Yale, Brown, Dartmouth, and other Ivy League schools “impose racial quotas and caps to maintain what they believe are ideal racial balances,” harkening back to the days of the Chinese Exclusion Act and the internment of Japanese Americans during World War II.

Like many other schools, Yale, Brown, and Dartmouth use a “holistic” approach to evaluate applicants, which allows race and ethnicity to become a large factor in the admission equation. In their complaint, the Asian-American groups assert that these colleges rely on stereotypes and biases to deny Asian-Americans admission. These include that Asian-Americans are not creative or well-rounded, lack critical thinking skills and leadership experience, and focus on studying instead of extracurricular activities.

Admission board reviewers’ notes track these stereotypes: “He’s quiet and, of course, wants to be a doctor” or her “scores and application seem so typical of other Asian applications I’ve read: Extraordinarily gifted in math with the opposite extreme in English….” Since the admissions policies at these schools are “shrouded in secrecy,” they freely discriminate against Asian-American applicants. In fact, Yale’s law school recently began destroying its admissions records, presumably to avoid having to disclose the criteria such as race and other standards they use to determine admissions.

The groups outline the harm these discriminatory policies cause, such as a cynical and negative view of the American higher education system and a lack of trust in the purported American meritocracy. The applicants themselves feel immense pressure to overachieve in order to gain one of the limited “Asian-American spots,” leading to more stress, an increased suicide rate, attempts to hide their racial identity, lower self-esteem, race-related conflict, and resentment.

Though the concept of race-preferential admissions undoubtedly came from a place of good intentions, it’s become increasingly clear that these policies are doing more harm than good. Indeed, there’s overwhelming evidence that giving applicants a significant boost based on race or ethnicity often sets them up for failure because they are “mismatched” with their schools and struggle to keep up with their peers.

How do schools that receive federal funding get away with imposing racial quotas and caps without violating the equal protection guarantees in the Constitution? Starting in 1978, the Supreme Court determined in Regents of the University of California v. Bakke that schools may use racial preferences as long as they are intended to promote the “educational benefits that flow from an ethnically diverse student body.”

It was not until 2003 that the Supreme Court revisited the issue of racial preferences in college admissions. The Supreme Court held in Grutter v. Bollinger that a school’s goal of reaching a “critical mass” to advance diversity on campus was permissible, and in Gratz v. Bollinger that schools must pursue “race-neutral alternatives” to achieve diversity though they are not required to exhaust “every conceivable race-neutral alternative.”

In practice, few schools use race-neutral programs in place of racial preferences, and Abigail Fisher’s case shows how schools have skirted this requirement to try race-neutral measures before putting a thumb on the race scales.

The Asian-American groups have asked the Departments of Education and Justice to intervene but they ultimately may need to bring lawsuits against Yale, Brown, and Dartmouth to see any real changes. Suits are currently pending against the University of North Carolina and Harvard challenging their racially discriminatory admissions programs (the latter brought by Asian-Americans who were denied admission).

The Constitution abhors classifications based on race, not only because those classifications can harm favored races or are based on illegitimate motives, but also because every time the government places citizens on racial registers and makes race relevant to the provision of burdens or benefits, it demeans us all.

Let’s hope that someday this view will prevail at the Supreme Court and the justices put this principle in place by banning racial preferences in college admissions.