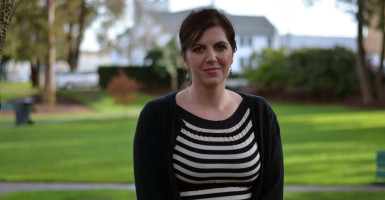 “I don't know if you remember being in fourth grade or not but, my gosh, can my kids be kids for a little while first?” Washington state mom Kaeley Triller Haver says of new gender identity standards in the schools. (Photo: Kelsey Harkness/The Daily Signal)

Kaeley Triller Haver is no stranger to the transgender bathroom debate. After being sexually assaulted as a child and going public with her story, the single mom from Washington state now opposes shower, locker room, and bathroom policies that she believes leave her and her daughter vulnerable and unsafe.

So earlier this month, when she found out that Washington public schools quietly adopted a new set of health education standards that include teaching kindergartners about gender expression and identity, Triller Haver was shocked she wasn’t involved.

“The only way I found out was through a Facebook post,” Triller Haver told The Daily Signal. “Not really the way any parent should discover information this critically important to their child’s life.”

The changes prompted an “outcry from thousands of parents across the state,” a spokesman for a conservative think tank says.

Washington adopted new gender identity guidelines in March as part of the state’s updated health and physical education standards. The state agency responsible for the guidelines said they were made available to the public for review, and provided The Daily Signal with examples where it solicited comment.

None, however, pointed to the addition of gender identity guidelines—instead referring to the proposal broadly as the state’s new “Physical Education Standards.”

Perhaps that’s why the guidelines went unnoticed by both parents and the media, until Peter Hasson, a reporter for The Daily Caller, stumbled upon them while doing research for a different story.

After his article was published, parents and citizens of Washington voiced outrage, with some even writing on Facebook that they removed their children from the state’s public school system altogether.

“Pulled my child out of school for next year because of this nonsense and made sure I let our local school district and the OSPI know why,” Renae Purdy wrote on Facebook, referring to the Office of the Superintendent for Public Instruction. “If we ban together, homeschool our kids, and put in enough complaint calls they will have to change these policies. They need to stick to teaching academics and leave personal issues to be taught at home!”

Another, who identified herself on Facebook as Neilene Hodneland DeBoise, wrote:

In recent months, transgender bathroom policies have been trumpeted by President Barack Obama’s administration, which in March sent a letter to public schools nationwide mandating they allow transgender students into sex-segregated facilities based on their gender identity.

Because of her past experience with sexual abuse, Triller Haver now argues against this policy and in favor of keeping bathrooms, locker rooms, and showers separated by biological sex.

Washington state’s new gender identity guidelines map out specific “standards” for each grade level to achieve. These include teaching kindergartners that “there are many ways to express gender,” defining sexual orientation to fourth-graders, and describing to fifth-graders “how media, society, and culture can influence ideas regarding gender roles, identity, and expression.”

The purpose, a press release states, is to “provide the guidance to teach, reinforce, and apply all of the state’s learning goals.”

“I don’t know if you remember being in fourth grade or not but, my gosh, can my kids be kids for a little while first?” Triller Haver asked.

The guidelines also include a glossary defining gender as “A social construct based on emotional, behavioral, and cultural characteristics attached to a person’s assigned biological sex.” To some, this is a welcome change. Responding to the new policies online, one Facebook user who identifies herself as Brenna Searle, wrote:

I didn’t transition until my 30s because I literally had ZERO context for what I was going through. It’s all well and good to say ‘leave it to the parents’ but my parents were well-meaning people who had no way to inform me it was even an option. We need education to keep young trans children from mental health issues and suicide[,] from not knowing who they are or who they were meant to be.

Others, like Triller Haver, say that teaching the subject of gender identity to kindergartners encroaches on parents’ rights.

“It’s not age appropriate,” she said. “It’s not science or math, it’s ideology. And that’s not appropriate for the government or anyone to take taxpayer money and force parents into conversations they’re not ready to have with their kids.”

The Office of the Superintendent of Public Instruction, which is the authority on public education in the state, adopted the health and physical education standards in March. According to a memo issued by Superintendent Randy Dorn, his office “collaboratively” developed the standards “with teachers, administrators, subject matter experts, state and national associations, and stakeholders in health and physical education” starting in September 2014.

It is unclear whether schools are required to adopt the gender identity guidelines.

According to the document, the standards are “required elements of instruction.” Page 2 reads:

The Washington state learning standards are the required elements of instruction and are worded broadly enough to allow for local decision-making. Outcomes provide the specificity to support school districts in meeting each standard in each grade level. Depending on school resources and community norms, instructional activities may vary.

By implementing grade-level outcomes, educators will help students meet the learning standards. All districts, schools, and educators in Washington state are expected to implement the state learning standards for all students. However, educators should use their own understanding of their students to make adjustments to teaching activities as needed.

However, Nate Olson, communications director at the state’s Office of the Superintendent for Public Instruction, said the standards aren’t mandatory. In an interview with The Daily Signal, he called the standards “best practices.”

“If districts want to teach the topic of self-identity, what our teachers did is come up with grade-level suggestions for a bunch of different topics,” Olson said.

Whether gender identity is a required subject is in some ways irrelevant, argued Zachary Freeman, director of communications at the Family Policy Institute of Washington, a conservative think tank. Freeman said:

State law compels school districts to follow the standards and outcomes of [the Office of the Superintendent for Public Instruction], and [that office] can reject a district’s curriculum if it doesn’t meet their standards.

Because of “outcry from thousands of parents across the state,” Freeman said, the superintendent’s office “says it will be clarifying the language in the standards to make it clear that schools are not required to teach students about these topics.”

Olson confirmed to The Daily Signal that the superintendent’s office will  correct “an inconsistency” in the standards to make clear the topic of gender identity is not required.

Freeman argued any correction is beside the point.

“The fact that [gender identity] appears on the documents at all shows clearly that there is some sort of agenda being promoted.”

That agenda, Triller Haver said, is the reason she would home-school or send her daughter to private school if she were financially able to afford those costs.

“I feel like I’m basically being held hostage,” she said. “My kids have to go to school, I have to go to work, I don’t have a lot of options.”

Olson, speaking for the state superintendent’s office, apologized to parents who “did not hear about this until it was too late.”

“The process was no different than the adoption for any other standards that we’ve adopted or revised,” he said. If a parent is upset about the learning goals,  he said, “I would encourage them to go to their local school board and say ‘I don’t agree with this.'”

Triller Haver said she believes the better route for schools to follow is adhering to anti-bullying programs that are already in place.

“Standard anti-bullying programs and curriculums that are not specific to gender should be more than enough to cover it,” she said, adding: