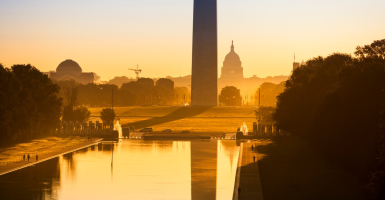 It’s not only hard to fire federal employees—it’s hard just to rate them as anything less than “fully successful.” (Photo: iStock Photos)

According to a recent study by the Government Accountability Office, virtually all federal employees are above average.

Under a normal, bell curve distribution, an equally low percentage of employees would be rated in the lowest and highest categories. Yet, for every federal employee with the lowest “unacceptable” rating, 386 employees receive the highest “outstanding” rating.

Are federal employees really that far superior to private sector employees, or is the rating system rigged?

Not so in the federal government.

According to a study by the Office of Personnel Management, almost 80 percent of all federal managers have managed a poorly performing employee, but fewer than 15 percent issued less than fully successful ratings for problematic employees.

It’s not only hard to fire federal employees—it’s hard just to rate them as anything less than “fully successful.”

Even fewer—less than 8 percent—attempted to reassign, demote, or remove problematic employees, and among those who attempted to do so, fully 78 percent said their efforts had no effect. Consequently, the federal government’s annual 0.46 percent firing rate is less than a third of the private sector’s 1.5 percent monthly layoff and discharge rate.

It’s not only hard to fire federal employees—it’s hard just to rate them as anything less than “fully successful.” Federal managers who rate their employees as either “minimally successful” or “unacceptable” must develop extensive and time-consuming performance improvement plans for those employees. And employees who receive less than favorable ratings can appeal those decisions through either a union grievance or to the Merit Systems Protection Board, and most do. Defending that decision can cost an agency tens or hundreds of thousands of dollars.

But inflated ratings and keeping problematic employees on the federal payroll costs taxpayers millions—if not billions—of dollars every year. That’s because performance-based pay increases are tied to those ratings.