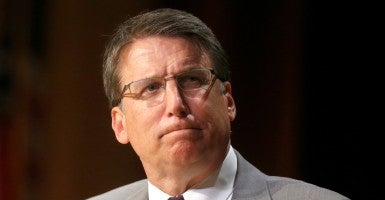 Petitions delivered by LGBT activists to the North Carolina governor’s office, calling for a repeal of the state’s “bathroom bill,” were mostly signed by out-of-state individuals, the North State Journal reported.

A joint project of the Human Rights Campaign, the Campaign for Southern Equality, the ACLU of North Carolina, and Equality North Carolina, called Turn Out! NC, organized a drive in which the groups say they delivered 190,000 opposing petitions to McCrory’s office on April 25.

Media reports showed the groups delivering numerous boxes of petitions to McCrory’s office. A local TV anchor and reporter with WRAL-TV in Raleigh tweeted a photo that shows at least a couple dozen boxes stacked up:

“While they made for a compelling visual, the boxes themselves and the signature boasting that followed painted a misleading picture of the public opinion in North Carolina, as was affirmed by a recent analysis of the petitions,” Sister Toldjah wrote in an op-ed for Independent Journal Review.

The governor’s office claimed on Twitter that the groups delivered enough petitions to fill two boxes. McCrory’s office tweeted a photo showing a much larger stack of out-of-state petitions next to a smaller pile of petitions:

“LGBT activists are masters of PR and public manipulation,” Rios told The Daily Signal. “With the help of the media, they mold public opinion by skewing poll questions and results, masterfully creating inevitability as they did on gay marriage.”

“The truth is, this is a movement fueled by smoke and mirrors…and empty boxes,” Rios added.

“We had so many signatures on the petitions, we printed only the list of names rather than more than 185,000 pages of individually signed petitions. And contrary to what Gov. McCrory has suggested, thousands of these signatories are North Carolinians,” The Human Rights Campaign said in a statement, WRAL.com reported.

The Human Rights Campaign did not respond to request for comment by email or phone.

“House Bill 2 is bad for North Carolina; it’s bad for our reputation and it needs to be repealed,” Chris Sgro, executive director of Equality North Carolina, told The Daily Signal. Sgro said:

Under North Carolina’s law, The Heritage Foundation’s Ryan T. Anderson wrote that private schools and business are free to establish whatever bathroom policies they would like.

Retail giant Target implemented an “inclusive” bathroom policy in April, allowing individuals to use the bathroom of their choice, based on gender identity.

Over 1.3 million people have signed a pledge to boycott Target that was started by the American Family Association, a nonprofit that supports Christians values.

“With its profits in the gender-free toilet, Target CEO Brian Cornell was on the hot seat with investors for the decision, which analysts say has cost the retailer more than $4.5 billion—and counting,” Family Research Council President Tony Perkins’ Washington Update from Thursday says.

“As everyone on Wall Street knows, Target’s stocks have taken a nearly 20-percent nosedive since April 19, when the change was announced,” the Washington Update added.