Conservatives Have a Plan to Block Women in the Draft 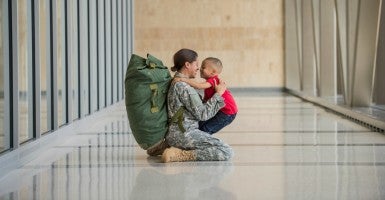 The Senate version of the National Defense Authorization Act includes a provision that would require women to register for the draft. Conservatives plan to strip out the provision when the House and Senate go to conference. (Photo: Mark Edward Atkinson/Tracey Lee Blend Images/Newscom)

The Senate voted 85-13 Tuesday to advance an annual defense policy bill that would require women to register for the draft. But that doesn’t mean the provision is guaranteed to become law.

Opponents of the draft measure will have an opportunity to kill it when the House and Senate reconcile the differences between their versions of the National Defense Authorization Act in conference.

The time of the conference and the exact number of conferees from the House and Senate has not been determined. But Sen. James Inhofe, R-Okla., who is guaranteed a seat at the negotiation table as the senior member of the Armed Services Committee, already announced he plans to strip out the controversial measure.

Inhofe promised in a statement to try to remove, in conference, “the unnecessary Senate language requiring women to register for the draft.”

That’s only possible because the House already stripped a proposed draft requirement from its version of the bill back in May. That makes conference, a GOP aide tells The Daily Signal, the best time to address the issue.

Senate conservatives are banking on House Republicans bailing them out on the issue. The House version of the legislation passed with bipartisan support, the aide explained, showing that the bill can make it to President Barack Obama’s desk without the draft provision.

In the last few weeks, the draft issue has dominated debate in the Senate. Opponents argue that requiring women to register for the Selective Service System would restrict their freedom. Proponents reply that expanding the draft is about equality.

Sen. Mike Lee, R-Utah, wrote an amendment that would prohibit the government from compelling women to sign up for Selective Service and would direct the Pentagon to conduct a study into the merits of mandatory military service.

“It’s one thing for women who want to be in combat and have earned it to do that, but forcing women to fight is a totally different matter,” Lee said in an interview with The Daily Signal.

But after pushing his bill in the press, Lee declined to forward the amendment on the Senate floor.

Sen. John McCain, R-Ariz., opposed Lee’s amendment but supported bringing it to the floor for a vote.

During a floor fight, Lee blocked consideration of McCain’s amendment that would expand visas for Afghan interpreters. The Utah lawmaker was attempting to use his objection as leverage to advance another amendment that would prevent the government from indefinitely detaining American citizens linked to terror.

The Utah senator would only release the measure, an aide from Lee’s office said, if leadership guaranteed that the Senate would vote on both the detention and the draft amendments. Ultimately, neither received a vote.

It’s not clear if Lee’s amendment had the votes necessary to advance. Failure on the floor would have made it more difficult for conservatives to cut out the provision later during conference.

Heritage Action for America opposes the legislation, saying that it would “allow the American military to be a playground for President Obama’s social engineering.”

Only six Republicans—Lee, Mike Crapo and James Risch of Idaho, Ted Cruz of Texas, Rand Paul of Kentucky, and Ben Sasse of Nebraska—voted against the bill.