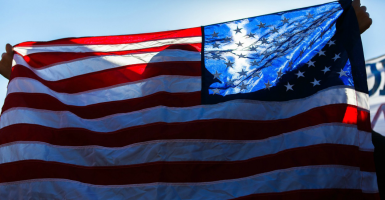 Everybody, but especially young men, needs to feel like they’re part of something bigger than themselves, a sense that we’re all in this together. (Photo: Keith Lane/TNS/Newscom)

Despite signs everywhere that the Orlando massacre has failed to bring the country together, there seems to be a growing consensus on at least one point—considering a return to E Pluribus Unum.

This is a national debate that conservatives have long demanded and should relish having.

Sure, some are recalling the motto only to rebuke Donald Trump’s call for a suspension of immigration from Muslim nations. But that shouldn’t matter to conservatives, who should concentrate now on forcing the reopening of this discussion.

So, when Hillary Clinton says, “E Pluribus Unum, One—Out of Many, One—has seen us through the darkest chapters of our history,” as she did at her first major speech after Orlando, conservatives should say, “Bring it on.”

Yes, let’s by all means return to that goal. Why did we ever abandon it in the first place?

Let’s debate how an American like Omar Mateen, born in Queens, New York, and raised in Fort Pierce, Florida, can turn into a terrorist bent on executing his compatriots. How does he grow up cheering the 9/11 attack in high school, thinking that women ought not to drive, and swearing allegiance to the Islamic State?

Everybody, but especially young men, needs to feel like they’re part of something bigger than themselves.

Everybody, but especially young men, needs to feel like they’re part of something bigger than themselves, a sense that we’re all in this together. If we as a society fail to give citizens national pride, we can be sure that some outside force will come along and do it.

The founders knew that the constitutional republic they were crafting required a single nation with one national identity smelted out of different ethnicities. Right away, in 1776 in fact, they came up with the concept of E Pluribus Unum.

To instill the new creed into the immigrants already flocking to America, they set an educational system that would create a nation with one national identity.

a large role in assimilating and educating the offspring of the immigrants then moving into the United States from Europe. The schools did not simply educate students in the basics of the English language or the Three Rs. Rather, the schools were actively involved in promoting the values and beliefs that were considered part and parcel of the American experience.

Schools taught that being an American required a belief in individual liberty and that rights are granted to us by virtue of our existence, not through government action. These principles united all people who came to this country in deeply rooted patriotism.

For the past three decades, for reasons that will also require analysis (though at a later date), we have been doing exactly the opposite. The new model, exemplified by the bestselling historian Howard Zinn, is to present America as a spectacular experiment in oppression.

Zinn’s “A People’s History of the United States” set the stage for the grievance mongering that passes for history classes today, and is still widely used. It has sold over 2 million copies since it was first published in 1980 and continues to sell over 100,000 copies a year because it is required reading at many of our high schools and colleges. That’s a lot of young minds.

This is how Zinn described the founding:

Around 1776, certain important people in the English colonies made a discovery that would prove enormously useful for the next two hundred years. They found that by creating a nation, a symbol, a legal unity called the United States, they could take over land, profits, and political power from favorites of the British Empire. In the process, they could hold back a number of potential rebellions and create a consensus of popular support for the rule of a new, privileged leadership.

And our educational authorities are doubling down today—even in the face of danger. The College Board’s leftist curriculum framework for Advanced Placement U.S. History—the courses that our best students take in high school—denigrates the founders’ assimilationist ethos and presses students “to think beyond national histories” and patriotic attachments.

The just released A.P. European History curriculum is no better. It presents religion only as an instrument of power, minimizes the evil of communism, and omits the importance of liberty.

As for the K-12 curriculum on the verge of being approved in the largest state in the Union, California, it is a blue print for redrawing America further still along multicultural lines. The assimilation required to attain E Pluribus Unum is “questionable by today’s standards that generally embrace having a plurality of experiences in the country.”

Assimilation, it adds, was the product of a mixture of “Social Darwinism, laissez-faire economics, as well as the religious reformism associated with the ideal of the Social Gospel.”

This is what is being taught to students, like Mateen once was, every day in our schools. So, yes, by all means, let’s have a discussion on why we should indoctrinate young minds in a way no society has ever done, why we should teach our young to “unlike” America.

Is this the approach we want to have, especially at a time when a force like the Islamic State will only be too glad to fill the patriotic vacuum, or should we teach again that America is an exceptionally free and prosperous nation that requires love and affection and constant attention?

The author Sebastian Junger, speaking at The Heritage Foundation this week about his new book, “Tribe,” reminded his audience that as bad as the Nazi Blitz on London was, its survivors missed afterward the sense of national pride they had felt while pitching in together.

The fact that the Orlando massacre has failed miserably to be a bond for national unity, but has only exposed our fissures, should be a mighty sign of how divided we are. This debate is well overdue.